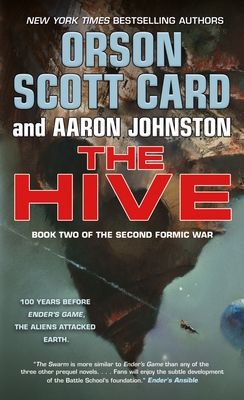 A coalition of Earths nations barely fought off the Formics first scout ship. Now its clear that theres a mother-ship out on edge of the system, and the aliens are prepared to take Earth by force. Can Earths warring nations and corporations put aside their differences and mount an effective defense?

Ender's Game is one of the most popular and bestselling science fiction novels of all time. The Formic War series (The First Formic War and The Second Formic War) are the prequels to Enders story.


Praise For The Hive: Book 2 of The Second Formic War…

The sections that feature highly intelligent, self-reliant childrenCard's trademarkare as excellent as ever... Another solidly engrossing installment, where the aliens are really just a sideshow: What we're witnessing is how and why Ender's child armies came to be.Kirkus Reviews

While the reader knows who wins the war, the fate of the engaging characters in this story is up in the air. Thirty-five years after he introduced Ender to the world, it's great to see that [Card] is still making magic in this imaginative world.New York Journal of Books

AARON JOHNSTON is the coauthor of The New York Times bestselling novels Earth Unaware, Earth Afire, and other Ender's Game prequel novels. He was also the co-creator and showrunner for the sci-fi series Extinct, as well as an associate producer on the movie Enders Game. He and his wife are the parents of four children.
Loading...
or support indie stores by buying on