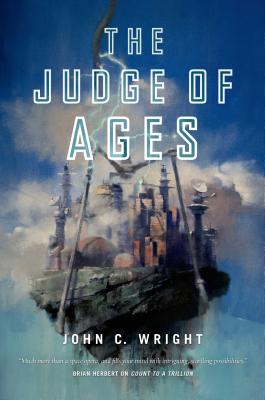 The Judge of Ages (Paperback)

Book Three of the Eschaton Sequence

The year is 10,515 AD. The Hyades Armada, traveling at near lightspeed, will reach Earth in just four centuries to assess humanity's value as slaves. For the last 8,000 years, two opposing factions have labored to meet the alien threat in very different ways.

One of them is Ximen del Azarchel, immortal leader of the mutineers from the starship Hermetic and self-appointed Master of the World, who has allowed his followers to tamper continuously with the evolutionary destiny of Man, creating one bizarre race after another in an apparent search for a species the Hyades will find worthy of conquest.

The other is Menelaus Montrose, the posthuman Judge of Ages, whose cryonic Tombs beneath the surface of Earth have preserved survivors from each epoch created by the Hermeticists. Montrose intends to thwart the alien invaders any way he can, and to remain alive long enough to be reunited with his bride Rania, who is on a seventy-millennia journey to confront the Hyades' masters, tens of thousands of light-years away.

Now, with the countdown to the Hyades' arrival nearing its end, del Azarchel and Montrose square off for what is to be their final showdown for the fate of Earth, a battle of gunfire and cliometric calculus; powered armor and posthuman intelligence.

The Judge of Ages is the wildly inventive third volume in a series exploring future history and human evolution from John C. Wright.

JOHN C. WRIGHT is an attorney turned SF and fantasy writer. He has published short fiction in Asimov’s SF and elsewhere, and wrote the Chronicles of Chaos, The Golden Age, and The War of Dreaming series. His novel Orphans of Chaos was a finalist for the Nebula Award in 2005.

Praise For The Judge of Ages: Book Three of the Eschaton Sequence…