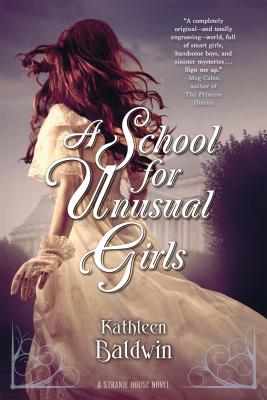 A School for Unusual Girls

It's 1814. Napoleon is exiled on Elba. Europe is in shambles. Britain is at war on four fronts. And Stranje House, a School for Unusual Girls, has become one of Regency England's dark little secrets. The daughters of the beau monde who don't fit high society's constrictive mold are banished to Stranje House to be reformed into marriageable young ladies. Or so their parents think. In truth, Headmistress Emma Stranje, the original unusual girl, has plans for the young ladies-plans that entangle the girls in the dangerous world of spies, diplomacy, and war.

After accidentally setting her father's stables on fire while performing a scientific experiment, Miss Georgiana Fitzwilliam is sent to Stranje House. But Georgie has no intention of being turned into a simpering, pudding-headed, marriageable miss. She plans to escape as soon as possible-until she meets Lord Sebastian Wyatt. Thrust together in a desperate mission to invent a new invisible ink for the English war effort, Georgie and Sebastian must find a way to work together without losing their heads-or their hearts....


Praise For A School for Unusual Girls: A Stranje House Novel…

“Baldwin has an ear for period dialogue as she draws us into this world of sharp, smart young ladies who are actually being trained and deployed for the British war effort.... Swoony moments also abound.” —New York Times Book Review

“Romance readers who prize both brains and valor in a heroine will be pleased to make Georgie's acquaintance.” —Kirkus Reviews

“A School for Unusual Girls sucked me in from the first few pages and kept me reading until late into the night. Kathleen Baldwin has created a completely original--and totally engrossing--world, full of smart girls, handsome boys, and sinister mysteries. Who wouldn't want to enroll?” —Meg Cabot, bestselling author of The Princess Diaries

“Spellbinding! A School for Unusual Girls is a beautifully written tale of adventure, intrigue, and romance that will appeal to every girl who has ever felt different…. A true page-turner!” —Rachel Hawthorne, NYT and USA Today bestselling author of Trouble from the Start

“Baldwin has crafted a Regency romance that celebrates smart, strong young women who, while careful to embrace many of society's mores, hold their own with the men they encounter, oftentimes besting them both intellectually and physically.... Readers can look forward to revisiting these enthralling characters and their adventures and romances in the Stranje House series.” —Booklist

KATHLEEN BALDWIN has written award-winning traditional Regency romances for adults, including Lady Fiasco, winner of Cataromance's Best Traditional Regency, and Mistaken Kiss, a Holt Medallion Finalist. She lives in Texas with her family.
Loading...
or
Not Currently Available for Direct Purchase