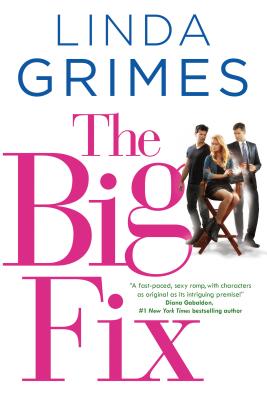 Linda Grimes's sexy and hilarious urban fantasy series that began with In a Fix and Quick Fix continues in The Big Fix.

Aura adaptor extraordinaire Ciel Halligan, who uses her chameleon-like abilities to fix her clients' problems—as them—is filling in on set for action superstar Jackson Gunn, whose snake phobia is standing in the way of his completing his latest mega-millions Hollywood blockbuster. There's only one thing Jack fears more than snakes, and that's the possibility of his fans finding out he screams at the sight of one. Going from hero to laughing stock isn't part of his career plan.

Seems like a simple enough job to Ciel, who doesn't particularly like snakes, but figures she can tolerate an afternoon with them, for the right price—which Jack is offering, and then some. What she doesn't count on is finding out that while she was busy wrangling snakes for him, his wife was busy getting killed. When Ciel goes to break the sad news to the star, she finds out Jack was AWOL from her client hideaway at the time of the murder.

Ciel begins to suspect Jack's phobia was phony, and that he only hired her to provide him with an alibi—but if she goes to the police, she'll have to explain how she knows he wasn't really on set. Up against a wall, Ciel calls on her best-friend-turned-love-interest Billy, and her not-so-ex-crush Mark, to help her set up the sting of a lifetime.

“Bright, fizzy, sexy and amusing--the perfect antidote to an attack of post-summer blues.” —Kirkus Reviews on In a Fix

“Fans of both hard and soft fantasy and crime drama will love [the] protagonist's spunky, irreverent attitude as well as Grimes's character-building skills and unusual storyline.” —Library Journal, starred review, on In a Fix

“Seamlessly blending humor and action, Grimes thoroughly impresses with her debut novel. This deliciously sexy and fun-filled romp simply is a must-read.” —RT Book Reviews (4 ½ stars, Top Pick!) on In a Fix

“Grimes continues her unique ‘fantasy-abulous/quasi-cozy-ish' series starring the unsinkable, cheeky Ciel, who's a gem. In fact, all of Grimes's characters rise to the occasion. The plot is absorbing, intriguing, and fast-paced, and as the pages fly by, readers are treated to raucous humor mixed with chilling suspense and a romance bonus, which fans of urban fantasy, mystery, and romance will love. This title stands well alone but should be read after the previous one for maximum comprehension and enjoyment.” —Library Journal on Quick Fix

“Snappy storytelling and distinctive characters will keep you turning the pages. As if that's not enough, the banter between Ciel and Billy is as infectious as their passion is full of sizzle.” —RT Book Reviews on Quick Fix