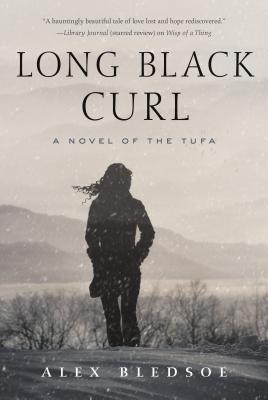 "Reading Long Black Curl makes me so happy that there are authors writing real North American-based mythic fiction: stories that incorporate the Americas where many of us live, infusing them with their own folklore and mythology-one that sits so well it feels like it's always been a part of us." —Charles de Lint

In all the time the Tufa have existed, only two have ever been exiled: Bo-Kate Wisby and her lover, Jefferson Powell. They were cast out, stripped of their ability to make music, and cursed to never be able to find their way back to Needsville. Their crime? A love that crossed the boundary of the two Tufa tribes, resulting in the death of several people.

Somehow, Bo-Kate has found her way back, and fueled by vengeful plans to change the town forever. The only one who can stop Bo-Kate is Jefferson, but even he isn't sure what will happen when they finally meet. Will he fall in love with her again? Will he join her in her quest to reign over the Tufa? Or will he have to sacrifice himself to save the people who once banished him?


Praise For Long Black Curl: A Novel of the Tufa (Tufa Novels #3)…

“Long Black Curl is an intricate and multifaceted story. It's no secret that music stirs the soul, and combining that with a folk-tale setting makes a deeply heart-rending novel. While this is third in the Tufa series, new readers will be more than able to enjoy the story, and fans will especially appreciate the progression of characters and events.” —RT Book Reviews

“Reading Long Black Curl makes me so happy that there are authors writing real North American-based mythic fiction: stories that incorporate the Americas where many of us live, infusing them with their own folklore and mythology-one that sits so well it feels like it's always been a part of us.” —Charles de Lint

“Long Black Curl is an emotional story full of hate, jealousy, revenge, and tragedy. It borders on horror. There is beauty, though, whenever music is present.” —Fantasy Literature

“This is a horror/SF blend with humorous overtones-the rock singer, Byron Harley, is clearly a twist on 1950s star Bill Haley-and it's a lot of fun.” —Booklist on Long Black Curl

“Beautifully written, surprisingly moving, and unexpected in the best of ways. ” —Seanan McGuire, New York Times bestselling author on Wisp of a Thing

“This beautifully handled drama once again comes complete with fascinating characters, a persuasive setting and intriguing complications. Bledsoe's on a roll.” —Kirkus Reviews, starred review on Wisp of a Thing

“Captures the allure and the sometimes sinister beauty of the Appalachian backwoods, filled with myths, haunted by ghosts, and touched, always, by death.” —Library Journal, starred review on Wisp of a Thing

“Bledsoe's rich, nearly poetic prose . . . captured me at page one and didn't let me go to the end. If you are a fan of urban fantasy, this is a book you need to add to your list today.” —Seattle Post-Intelligencer on The Hum and the Shiver

“I loved this book for many reasons--the bone-deep mystery, the setting, the music, and the harsh beauty of its characters. It gives a new meaning to well played.” —Rachel Caine, New York Times bestselling author of Two Weeks' Notice on The Hum and the Shiver

“Bledsoe crafts a deceptively simple story of family and community, laced with the music and beliefs of a magical reality.” —Library Journal, starred review on The Hum and the Shiver

“It's a mixture: folk tales and folk songs, updated with a dose of Sex and the City. Or a rustic version of 'urban fantasy,' with its suggestion that there's mystery just around the corner, hidden behind even the dullest small-town façade.” —The Wall Street Journal on The Hum and the Shiver

“This powerful, character-driven drama occurs against an utterly convincing backdrop and owns complications enough to keep everybody compulsively turning the pages.” —Kirkus Reviews, starred review on The Hum and the Shiver