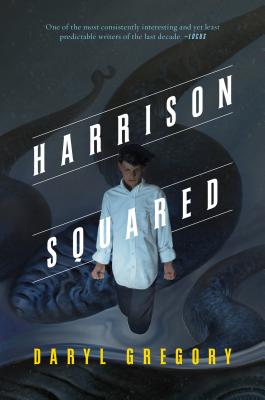 "Harrison Squared is a strange, wonderful read. The isolated seaside setting is beautifully crafted, and the prose is at once eerie, foreboding and funny." -Kendare Blake, author of Three Dark Crowns and Mortal Gods

From award winning author Daryl Gregory comes Harrison Squared, a thrilling and colorful Lovecraftian adventure of a teenage boy searching for his mother, and the macabre creatures he encounters.

Harrison Harrison-H2 to his mom-is a lonely teenager who's been terrified of the water ever since he was a toddler in California, when a huge sea creature capsized their boat, and his father vanished. One of the "sensitives" who are attuned to the supernatural world, Harrison and his mother have just moved to the worst possible place for a boy like him: Dunnsmouth, a Lovecraftian town perched on rocks above the Atlantic, where strange things go on by night, monsters lurk under the waves, and creepy teachers run the local high school. On Harrison's first day at school, his mother, a marine biologist, disappears at sea. Harrison must attempt to solve the mystery of her accident, which puts him in conflict with a strange church, a knife-wielding killer, and the Deep Ones, fish-human hybrids that live in the bay. It will take all his resources-and an unusual host of allies-to defeat the danger and find his mother.

"The combination of coming-of-age story, Lovecraftian horror, and mystery is at turns gently funny and intensely scary, a tough balance that Gregory (Afterparty) pulls off successfully."—Library Journal

"A tale handled with confidence and control, with loads of salty, piscine atmosphere...Superior, with plenty of crossover teen appeal."—Kirkus Reviews

Daryl Gregory was the 2009 winner of IAFA William L. Crawford Fantasy Award for his first novel Pandemonium. His second novel, The Devil's Alphabet, was nominated for the Philip K. Dick Award and was named one of the best books of 2009 by Publishers Weekly. His short fiction has appeared in The Magazine of Fantasy and Science Fiction, Asimov’s Science Fiction Magazine, and The Year’s Best SF. He has also written comics for BOOM! Studios and IDW.
Loading...
or
Not Currently Available for Direct Purchase