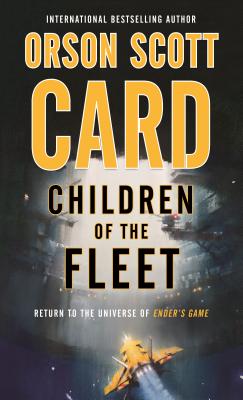 Children of the Fleet (Fleet School #1)

Ender Wiggin won the Third Formic war, ending the alien threat to Earth. Afterwards, all the terraformed Formic worlds were open to settlement by humans, and the International Fleet became the arm of the Ministry of Colonization, run by Hirum Graff. MinCol now runs Fleet School on the old Battle School station, and still recruits very smart kids to train as leaders of colony ships, and colonies.

Dabeet Ochoa is a very smart kid. Top of his class in every school. But he doesn’t think he has a chance at Fleet School, because he has no connections to the Fleet. That he knows of. At least until the day that Colonel Graff arrives at his school for an interview.


Praise For Children of the Fleet (Fleet School #1)…

Praise for Children of the Fleet

“Dabeet Ochoa is the kind of character who will stick in your mind.”—Bibliosanctum (3-1/2 stars out of 5)

“A worthy successor to the world of Ender's Game.”—Den of Geek (starred review)

“Card is a master storyteller.”—The Seattle Times on Ender's Game

“As always, everyone will be struck by the power of Card’s children, always more and less than human, perfect yet struggling, tragic yet hopeful, wondrous, and strange.”—Publishers Weekly (starred review) on Ender’s Shadow

“A completely gripping story.”—The Toronto Star on Speaker for the Dead

“Card has raised to a fine art the creation of suspense by means of ethical dilemmas.”—Chicago Sun-Times on Xenocide

Praise for the Ender's Shadow series

“Ender’s Shadow is entertaining, fast-paced science fiction. Don’t be surprised if [it] wins the Hugo and Nebula like its acclaimed predecessor.”—CNN Interactive

“Bean is in many ways an even more engaging hero than Ender.…Ender’s Shadow brings that world right back, and smart kids are going to eat it up.”—Locus