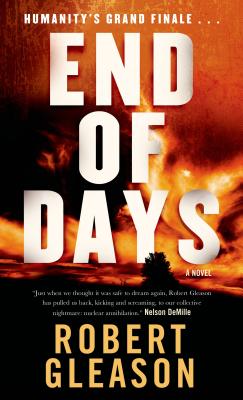 Lydia Lozen Magruder—the great-granddaughter of a female Apache war-shaman—has seen visions of the End since childhood. She has constructed a massive ranch-fortress in the American Southwest, stocked with everything necessary to rebuild civilization.

Now her visions are coming true. John Stone, once a baseball star and now a famous gonzo journalist, stumbled across a plan to blast humanity back to the Stone Age. Then he vanished. Lydia's only hope of tracking him down lies with her stubborn, globe-trotting daughter Kate, Stone's former lover.

Meanwhile, a Russian general obsessed with nuclear Armageddon has also disappeared...as have eight or more of his Russian subs, armed with nuclear-tipped missiles.

In Robert Gleason's End of Days, the world is armed for self-destruction. Who will survive?


Praise For End of Days: A Novel…

“Gleason's work with Junius Podrug on such novels as Apocalypse 2012 and The 2012 Code has made him an expert on all things apocalyptic, a subject he returns to with gusto in this wildly expansive tale of the coming End Times...It all adds up to a thrilling take on a frighteningly possible future, one that makes the journey in Cormac McCarthy's The Road look like a stroll through the park.” —Publishers Weekly (starred review) on End of Days