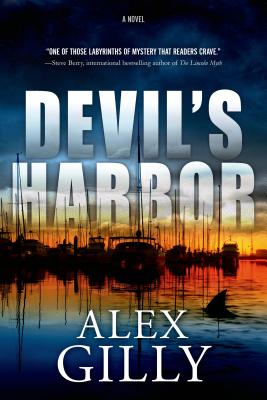 With heart-stopping thrills, a Walter White–esque villain, and a fascinating hero, Alex Gilly's Devil's Harbor is a thriller unlike any you have read before
Nick Finn and his partner and brother-in-law, Diego Jimenez, are used to rough water. As Marine Interdiction Agents for Customs and Border Protection, the two hunt drug smugglers, human traffickers, and other criminals who hide in the vastness of the waters surrounding southern California.

One night, Finn and Diego track a phantom boat off the Los Angeles coast, but it disappears before they can intercept it. They find a dead body in its wake, ravaged by sharks. Their investigation into the floater stalls when Finn is accused of using excessive force following the death of a suspected drug smuggler.

Then Diego is murdered—and Finn is the number-one suspect. As he races to find the real killer and save his marriage, Finn is forced to partner with Linda Blake, the desperate captain of the Pacific Belle and mother of Lucy, a very sick little girl, to attempt the one thing he has devoted his life to stopping.

In order to clear his name and save a child's life, Finn must smuggle narcotics by sea into the United States…and avoid the net that his CBP colleagues have cast for him.


Praise For Devil's Harbor: A Novel…

“Buy it! Recommend it! Push it on anyone who loves suspense and action served with hard-boiled style! The writing is exuberant yet controlled, the plot is twisty and devious yet easily tracked, the characters are freshly imagined...The boat chases are the best since the early Bond novels, the revelations are startling, and the bourbon scenes make you thirsty.” —Booklist (starred review)

“Devil's Harbor is a fast-paced, sophisticated thriller, filled with twists, turns and compelling characters that will stay with the reader long after they've read the exciting final pages. Alex Gilly is a writer to be reckoned with - one that knows his territory, whether it is a speedboat trapped in an offshore gale or how to aim a rifle from a pitching deck. This is a book that operates deliciously in the shadows beneath the dark Pacific waters surface and in the darker places in men's hearts. A fine debut that will keep readers up late at night.” —John Katzenbach, internationally bestselling author

“[A] thrill-a-moment first novel...The ending is an unexpected nail-bitter that crackles with tension.” —Publishers Weekly

ALEX GILLY is a writer and translator who was born in New York City and has lived in Australia, Canada, France, California, and the UK. Devil's Harbor is his first novel. He currently lives in Sydney with his wife and son.
Loading...
or
Not Currently Available for Direct Purchase