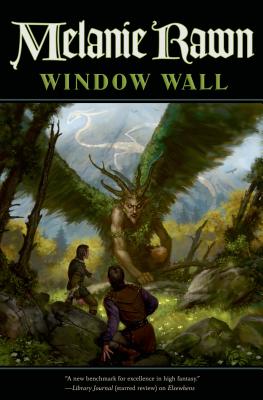 Melanie Rawn's delightful creation of the world of Albeyn is a place where the magical races have joined with humans in a melting pot of powers, and everyone loves the theater of magic. In Window Wall, her irrepressible cast of characters mature—at least a little. Not that they'll ever settle down.

For nearly two years, Cade has been rejecting his Fae gift, his prescient Elsewhens—simply refusing to see or experience them. But the strain is driving a wedge between him and his theater troupe, Touchstone, and making him erratic on stage and off. It takes his best friend Mieka to bully Cade into accepting the visions again. But when Cade finally looks into the possible futures, he sees a royal castle blowing up, though his vision does not tell him who is responsible. But he knows that if it is in his visions, he can take action to stop it from happening. And when he finally discovers the truth, he takes the knowledge to the only man in the Kingdom who would believe him: his deadly enemy the Archduke.

“Rawn's elegantly written saga about an artist's compulsion to create is a superb homage to the world of the theater and sets a new benchmark for excellence in high fantasy.” —Library Journal, starred review, on Elsewhens

“A lived-in world where the scars from magical wars still linger and pure blood is a thing of the distant past…. will appeal to fantasy fans and theater lovers alike.” —Publishers Weekly on Touchstone

“With a fully realized world and magical system, as well as a character-driven plot, this will appeal to fans of traditional fantasies like [Sanderson's] Warbreaker or [O'Sullivan's] Riyria series.” —Booklist on Touchstone

“A captivating tale of magic, theater, politics, and love…. Rawn's storytelling mastery, ability to create unforgettable characters, and fresh approaches to world-building and magic theory make this a must-read for an audience that extends well beyond her fans.” —Library Journal, starred review, on Touchstone

MELANIE RAWN is the three-time Locus Award–nominated author of the bestselling Dragon Prince trilogy, the Dragon Star trilogy, and the Glass Thorns trilogy, including Touchstone, Elsewhens, and Thornlost. She graduated from Scripps College with a BA in history and has worked as a teacher and editor. Rawn lives in Flagstaff, Arizona.
Loading...
or
Not Currently Available for Direct Purchase