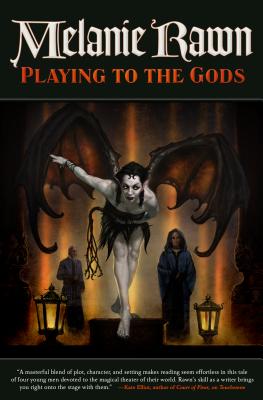 In this fifth book final volume of the acclaimed series Glass Thorns, Melanie Rawn has created a superb high fantasy series that blends the worlds of magic, theater, art, and politics.

The boys are at the top of their theatrical game. Their only real competition for the hearts and gold of the public are the Shadowshapers. Nevertheless, the past years of financial struggle, since their manager proved to have been embezzling, have taken a toll on the group’s creativity.

A shocking event brings all that to an end and brings Touchstone back together to create a play that will rattle the ceilings and shatter all the glass in palaces and theaters alike. An ancient conflict will come to a violent conclusion on stage, and all the gods will be watching.

MELANIE RAWN is the three-time Locus Award–nominated author of the bestselling Dragon Prince trilogy, the Dragon Star trilogy, and the Glass Thorns trilogy, including Touchstone, Elsewhens, and Thornlost. She graduated from Scripps College with a BA in history and has worked as a teacher and editor. Rawn lives in Flagstaff, Arizona.

Praise For Playing to the Gods (Glass Thorns #5)…

Praise for Playing to the Gods

Praise for the series Glass Thorns

“Will appeal to fantasy fans and theater lovers alike.”—Publishers Weekly on Touchstone

“With a fully realized world and magical system, as well as a character-driven plot, this will appeal to fans of traditional fantasies like [Sanderson's] Warbreaker or [O'Sullivan's] Riyria series.”—Booklist on Touchstone