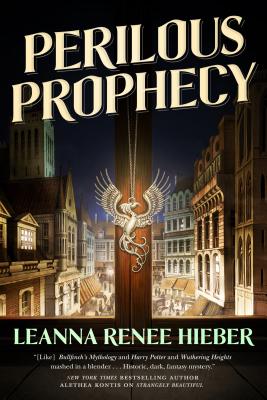 Winner of the Prism Award for Best Fantasy Novel

Cairo in the 1860s is a bustling metropolis where people from all walks of life mix and mingle, mostly in complex harmony. When evil ghosts and unquiet spirits stalk the city’s streets, the Guard are summoned—six young men and women of different cultures, backgrounds, and faiths, gifted by their Goddess with great powers.

While others of the Guard embrace their duties, their leader, British-born Beatrice, is gripped by doubt. What right has she, a bookish, sheltered, eighteen-year-old, to lead others into battle? Why isn’t dark-eyed, compelling Ibrahim, who is stronger of will than Beatrice, the one in charge?

Ghosts maraud through Cairo’s streets, heralding a terrible darkness. Beatrice and her Guard have little time to master their powers; a great battle looms as an ancient prophecy roars toward its final, deadly conclusion.

This enchanting prequel to Leanna Renee Hieber's gaslamp fantasy, Strangely Beautiful, returns to print after more than a decade, edited and revised for Tor's publication.

Leanna Renee Hieber helped create the gaslamp fantasy subgenre with her first novel, The Strangely Beautiful Tale of Miss Percy Parker, which won two Prism Awards for RWA's Fantasy, Futuristic, & Paranormal Chapter. A talented actress and singer who has been seen on stage and screen, Hieber can also sometimes be spotted leading ghost tours of New York City's Central Park. Her first YA novel, Darker Still was a Scholastic Highly Recommended Title, an INDIE NEXT selection, and a finalist for the Daphne du Maurier Award. Her books from Tor include The Eterna Files, first an historical urban fantasy/gaslamp fantasy series, and the author's preferred edition of Strangely Beautiful, which contains The Strangely Beautiful Tale of Miss Percy Parker and The Darkly Luminous Fight for Persephone Parker, united as the single novel the author originally intended, revised and with the addition of several new scenes. Hieber grew up in Ohio and now lives in the New York City area.
or support indie stores by buying on
Copyright © 2020 American Booksellers Association