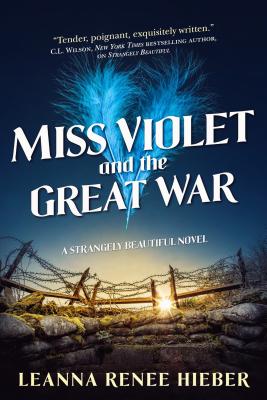 From childhood, Violet Rychman has dreamed of a coming war, of death and battle on an unimaginable scale. She has seen and heard ghosts, who have loved and guided her.

Now the future she dreamed has come to pass. World War I rages across Europe. Millions of people are dying; entire villages are disappearing.

A great and terrible vision sweeps over Violet, offering powers heralded by the Muses of antiquity. The ability to impact people’s memories, even shape their thoughts. To guide their souls. To pass between the world of the living and that of the dead and to bring others through that passage.

These and other gifts once belonged to people Violet loved. Now they are hers, and she must use them to attempt to stop death itself.

Leanna Renee Hieber helped create the gaslamp fantasy subgenre with her first novel, The Strangely Beautiful Tale of Miss Percy Parker, which won two Prism Awards for RWA's Fantasy, Futuristic, & Paranormal Chapter. A talented actress and singer who has been seen on stage and screen, Hieber can also sometimes be spotted leading ghost tours of New York City's Central Park. Her first YA novel, Darker Still was a Scholastic Highly Recommended Title, an INDIE NEXT selection, and a finalist for the Daphne du Maurier Award. Her books from Tor include The Eterna Files, first an historical urban fantasy/gaslamp fantasy series, and the author's preferred edition of Strangely Beautiful, which contains The Strangely Beautiful Tale of Miss Percy Parker and The Darkly Luminous Fight for Persephone Parker, united as the single novel the author originally intended, revised and with the addition of several new scenes. Hieber grew up in Ohio and now lives in the New York City area.

Praise For Miss Violet and the Great War: A Strangely Beautiful Novel…

“I cannot recommend this book, this series or this author enough.”—True-Blood.Net

“A secretive, gothic, paranormal world…a character who will resonate with anyone who has found the beauty in being different.”—Booklist

“Rich in conceits as anything from Alan Moore, Hieber’s novel mixes action and the emotional lives of its characters into a fascinating stew. Anyone who enjoyed Paul Cornell’s London Falling will certainly cozy up to Hieber’s parallel depiction of questioning savants and heroes versus the forces of anarchy and despair.”—Paul Di Filippo in Asimov’s Science Fiction on The Eterna Files