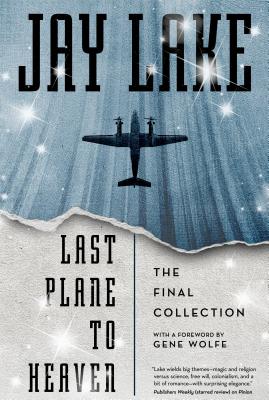 Long before he was a novelist, SF writer Jay Lake, was an acclaimed writer of short stories. In Last Plane to Heaven, Lake has assembled thirty-two of the best of them. Aliens and angels fill these pages, from the title story, a hard-edged and breathtaking look at how a real alien visitor might be received, to the savage truth of "The Cancer Catechisms." Here are more than thirty short stories written by a master of the form, science fiction and fantasy both.

This collection features an original introduction by Gene Wolfe.


Praise For Last Plane to Heaven: The Final Collection…

"The prolific Lake’s death in 2014, after a long, harrowing, and very public battle with cancer, gives extra weight to these 32 epitaphs. Lake’s command of language is strong and sincere, and his stories of everyday heartaches, filled with secret fears and self-delusion, whisk readers from inner geographies of mind to limitless gulfs of space."—Publishers Weekly

Jay Lake was a prolific writer of science fiction and fantasy, as well as an award-winning editor, a popular raconteur and toastmaster, and an excellent teacher at the many writers' workshops he attended. His novels included Tor's publications Mainspring, Escapement, and Pinion, and the trilogy of novels in his Green cycle - Green, Endurance, and Kalimpura. Lake was nominated multiple times for the Hugo Award, the Nebula Award, and the World Fantasy Award. He won the John W. Campbell Award for best new writer in 2004, the year after his first professional stories were published. In 2008 Jay Lake was diagnosed with colon cancer, and in the years after he became known outside the sf genre as a powerful and brutally honest blogger about the progression of his disease. Jay Lake died on June 1, 2014.