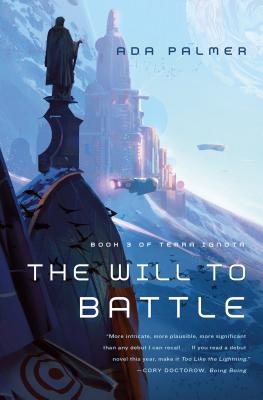 The Will to Battle

The long years of near-utopia have come to an abrupt end.

Peace and order are now figments of the past. Corruption, deception, and insurgency hum within the once steadfast leadership of the Hives, nations without fixed location.

The heartbreaking truth is that for decades, even centuries, the leaders of the great Hives bought the world’s stability with a trickle of secret murders, mathematically planned. So that no faction could ever dominate. So that the balance held.

The Hives’ façade of solidity is the only hope they have for maintaining a semblance of order, for preventing the public from succumbing to the savagery and bloodlust of wars past. But as the great secret becomes more and more widely known, that façade is slipping away.

Just days earlier, the world was a pinnacle of human civilization. Now everyone—Hives and hiveless, Utopians and sensayers, emperors and the downtrodden, warriors and saints—scrambles to prepare for the seemingly inevitable war.

Terra Ignota Series
1. Too Like the Lightning
2. Seven Surrenders
3. The Will to Battle


Praise For The Will to Battle: Book 3 of Terra Ignota…

Ada Palmer is a professor in the history department of the University of Chicago, specializing in Renaissance history and the history of ideas. Her first nonfiction book, Reading Lucretius in the Renaissance, was published in 2014 by Harvard University Press. She is also a composer of folk and Renaissance-tinged a cappella vocal music on historical themes, most of which she performs with the group Sassafrass. She writes about history for a popular audience at exurbe.com and about SF and fantasy-related matters at Tor.com. Too Like the Lightning is her debut fiction book.
Loading...
or
Not Currently Available for Direct Purchase