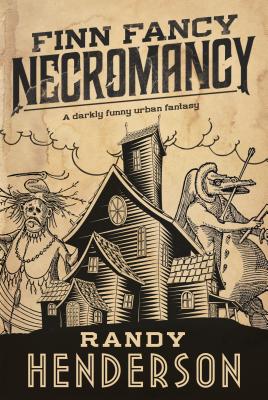 Finn Gramaraye was framed for the crime of dark necromancy at the age of 15, and exiled to the Other Realm for twenty five years. But now that he's free, someone-probably the same someone-is trying to get him sent back. Finn has only a few days to discover who is so desperate to keep him out of the mortal world, and find evidence to prove it to the Arcane Enforcers. They are going to be very hard to convince, since he's already been convicted of trying to kill someone with dark magic.

“Absolutely marvelous. A funny, quirky, and compelling tale full of fantastic twists and dire conspiracies, featuring a charmingly awkward hero you'll root for every step of the way. Henderson's voice is unique and delightful and this is, hands down, the best fantasy debut novel of the year.” —Kat Richardson, bestselling author of the Greywalker series

“Mix one cup humor, two cups homage to the 80s, and three cups imagination run wild and you get Randy Henderson's debut novel, Finn Fancy Necromancy.... Any child of the 80s and lover of fun, funny fantasy is going to love Henderson's first shuffle onto the storyteller's stage...and demand an immediate encore.” —Ken Scholes, author of the Psalms of Isaak series

“A fast-paced fantasy mystery.... Henderson's debut novel is somehow lighthearted despite the doom and gloom inherent in its premise…. The quick turns of the mystery plot make this a speedy and enjoyable read, and Finn's world is a lively one, packed with all manner of weird and wonderful ghosts and goblins…. Genre fans looking for a fix will enjoy the gleefully ghoulish setting and engaging, suspenseful plot.” —Kirkus Reviews

“Henderson's debut is written from the unusual viewpoint of a teenager full of 1980s memories thrown into an adult body in the present day, and Finn faces peril at every turn.... The entertaining style and breakneck pace nonetheless make it easy to fall into Finn's world for a fun, if flawed, getaway.” —Publishers Weekly

“Funny and exciting.... The family dynamics between Finn and his brothers are well done, and the author (winner of Writers of the Future's 2014 Golden Pen Award) excellently shows Finn as an emotionally stunted teenager suddenly middle-aged and having to deal with the family and friends he left behind. A promising writer to watch.” —Library Journal