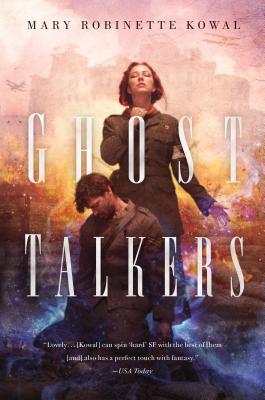 “Powerful, laden with emotion, and smartly written.” —Brandon Sanderson, author of Mistborn and The Way of Kings

Ginger Stuyvesant, an American heiress living in London during World War I, is engaged to Captain Benjamin Harford, an intelligence officer. Ginger is a medium for the Spirit Corps, a special Spiritualist force.

Each soldier heading for the front is conditioned to report to the mediums of the Spirit Corps when they die so the Corps can pass instant information about troop movements to military intelligence.

Ginger and her fellow mediums contribute a great deal to the war efforts, so long as they pass the information through appropriate channels. While Ben is away at the front, Ginger discovers the presence of a traitor. Without the presence of her fiancé to validate her findings, the top brass thinks she's just imagining things. Even worse, it is clear that the Spirit Corps is now being directly targeted by the German war effort. Left to her own devices, Ginger has to find out how the Germans are targeting the Spirit Corps and stop them. This is a difficult and dangerous task for a woman of that era, but this time both the spirit and the flesh are willing…

MARY ROBINETTE KOWAL was the 2008 recipient of the John W. Campbell Award for Best New Writer and a Hugo winner for her story “For Want of a Nail.” Her short fiction has appeared in Strange Horizons, Asimov’s, and several Year’s Best anthologies. She also writes the Glamourist History series, which began with Shades of Milk and Honey. A professional puppeteer and voice actor, she spent five years touring nationally with puppet theaters. She lives in Chicago with her husband Rob and many manual typewriters.
Loading...
or
Not Currently Available for Direct Purchase