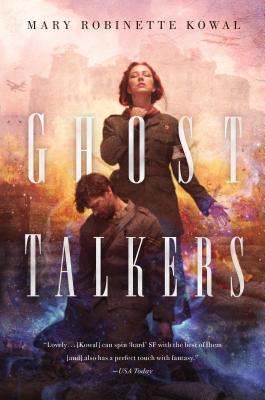 “Powerful, laden with emotion, and smartly written.” —Brandon Sanderson, author of Mistborn and The Way of Kings

Ginger Stuyvesant, an American heiress living in London during World War I, is engaged to Captain Benjamin Harford, an intelligence officer. Ginger is a medium for the Spirit Corps, a special Spiritualist force.

Each soldier heading for the front is conditioned to report to the mediums of the Spirit Corps when they die so the Corps can pass instant information about troop movements to military intelligence.

Ginger and her fellow mediums contribute a great deal to the war efforts, so long as they pass the information through appropriate channels. While Ben is away at the front, Ginger discovers the presence of a traitor. Without the presence of her fiancé to validate her findings, the top brass thinks she's just imagining things. Even worse, it is clear that the Spirit Corps is now being directly targeted by the German war effort. Left to her own devices, Ginger has to find out how the Germans are targeting the Spirit Corps and stop them. This is a difficult and dangerous task for a woman of that era, but this time both the spirit and the flesh are willing…

Mary Robinette Kowal is the author of the Hugo, Nebula, and Locus Award-winning alternate history novel, The Calculating Stars, the first book in the Lady Astronaut series. She is also the author of The Glamourist Histories series and Ghost Talkers and has received the Astounding Award for Best New Writer, four Hugo Awards, the Nebula, and Locus Awards. Her stories appear in Asimov’s, Uncanny, and several Year’s Best anthologies. Mary Robinette has also worked as a professional puppeteer, is a member of the Award-winning podcast Writing Excuses, and performs as a voice actor (SAG/AFTRA), recording fiction for authors including Seanan McGuire, Cory Doctorow, and Neal Stephenson. She lives in Tennessee with her husband Rob and over a dozen manual typewriters.
Loading...
or support indie stores by buying on