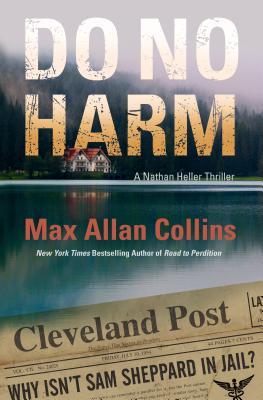 Do No Harm is the latest mystery in the Nathan Heller series by New York Times bestselling author Max Allan Collins.

It's 1954 and Heller takes on the Sam Sheppard case—a young doctor is startled from sleep and discovers his wife brutally murdered. He claims that a mysterious intruder killed his wife. But all the evidence points to a disturbed husband who has grown tired of married life and yearned to be free at all costs. Sheppard is swiftly convicted and sent to rot in prison.

Just how firm was the evidence…and was it tampered with to fit a convenient narrative to settle scores and push political agendas? Nathan’s old friend Elliot Ness calls in a favor and as Nathan digs into the case he becomes convinced of Sheppard’s innocence. But Nate can’t prove it and has to let the case drop.

The road to justice is sometimes a long one. Heller's given another chance years later and this time he's determined to free the man…even if it brings his own death a bit closer.

MAX ALLAN COLLINS has been chosen as the 2017 Grand Master by Mystery Writers of America (MWA). He is the bestselling author of the graphic novel Road to Perdition, the basis for the hit film starring Tom Hanks. He has won two Shamus Awards, for True Detective and Stolen Away, both from his series of Nathan Heller novels. A prolific writer, Collins' other works include mystery novels, screenplays, comic books, film novelizations, and historical fiction.

“Collins has an outwardly artless style that conceals a great deal of art.” —New York Times

“Collins has not only devised an original take on what may well be the most-written-about crime in history but also made Heller's role in the case plausible.” —Publishers Weekly on Target Lancer

“Collins spins a fascinating tale with appearances by Jack Ruby, Jimmy Hoffa, and Bobby Kennedy. Gripping from the get-go, this will satisfy both Heller fans and assassination wonks ever eager for a new spin on the story.” —Booklist on Target Lancer