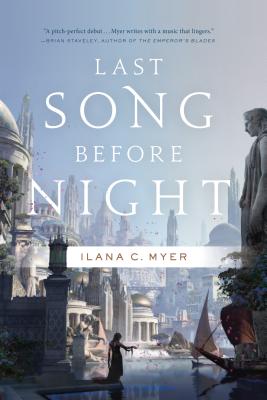 Her name was Kimbralin Amaristoth: sister to a cruel brother, daughter of a hateful family. But she has forsworn that name, and now she is simply Lin, a musician and lyricist of uncommon ability in a land where women are forbidden to answer such callings—a fugitive who must conceal her identity or risk imprisonment and even death.

On the eve of a great festival, Lin learns that an ancient scourge has returned to the land of Eivar, a pandemic both deadly and unnatural. Its resurgence brings with it the memory of an apocalypse that transformed half a continent. Long ago, magic was everywhere, rising from artistic expression—from song, from verse, from stories. But in Eivar, where poets once wove enchantments from their words and harps, the power was lost. Forbidden experiments in blood divination unleashed the plague that is remembered as the Red Death, killing thousands before it was stopped, and Eivar's connection to the Otherworld from which all enchantment flowed, was broken.

The Red Death's return can mean only one thing: someone is spilling innocent blood in order to master dark magic. Now poets who thought only to gain fame for their songs face a challenge much greater: galvanized by Valanir Ocune, greatest Seer of the age, Lin and several others set out to reclaim their legacy and reopen the way to the Otherworld—a quest that will test their deepest desires, imperil their lives, and decide the future.


Praise For Last Song Before Night: The Harp and Ring Sequence #1…

“Last Song is an elegantly executed, masterfully conceived tale filled with memorable characters—some base, some noble, all steeped in real human complexity and eminently plausible in their motivations and actions. The wider world of Myer’s fantasy milieu, the lands beyond Eivar, are only hinted at in this first book, which gives the future volumes of this trilogy-to-be room in which to grow and explore new octaves of Myer’s opus.”—David Mack

“In this pitch-perfect debut, Myer has created a world of knife-wielding poets, bloody bards, and songs so important, so dangerous, that women and men are willing to die to sing them or hear them silenced. Myer writes with a music that lingers, even after you close the book for the night.” —Brian Staveley, author of The Providence of Fire

“Last Song Before Night is a chilling tale of censorship out of control, set in a realm where music is magic, and a crackdown on bards may spell the end of enchantment for everyone. Lin, Ilana C. Myer's unforgettable songwriter-heroine, must survive in a society that limits what men can sing and forbids women to perform outright. Despite this, she strives to restore a musical and mystical balance before plague--and worse--can crush an already stifled society. A riveting debut novel from a promising newcomer.” —A. M. Dellamonica, author of Child of a Hidden Sea

“In the kaleidoscopic Last Song Before Night, Ilana C. Myers' poets, nobles, and rogues fight for power in a world where blades may cut deep, but words are the most powerful weapon of all. A lovely debut.” —Fran Wilde, author of Updraft

“Beautifully lyrical, Myer's high-fantasy debut weaves a multilayered tale of good versus evil and intimate self-discoveries. The gradual reveal of the main plot and the characters' personal truths builds to a poetic crescendo worthy of their epic quest. With detailed worldbuilding and vivid characters - most notably Lin, the strong female protagonist - this lush and luminous story combines exquisite splendor and fathomless cruelty as it champions the power of art and the resilience of the human spirit. While the plot comes full circle, it appears that the adventure is only beginning.” —RT Book Reviews

“Poetry, music and magic combine into a sumptuous symphony in Last Song Before Night, the debut novel from Ilana C Myer.”—SF Signal