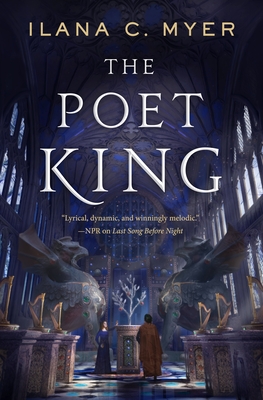 The Poet King (The Harp and Ring Sequence #3)

Prophecies unfold, legends turn real, and a war of mythical proportions endangers the realm in Ilana C. Myer’s epic fantasy The Poet King, the follow-up to her critically-acclaimed Fire Dance, continuing The Harp and Ring Sequence.

After a surprising upheaval, the nation of Tamryllin has a new ruler: Elissan Diar, who proclaims himself the first Poet King. Not all in court is happy with this regime change, as Rianna secretly schemes against him while she investigates a mysterious weapon he hides in the bowels of the palace.

Meanwhile, a civil war rages in a distant land, and former Court Poet Lin Amaristoth gathers allies old and new to return to Tamryllin in time to stop the coronation. For the Poet King’s ascension is connected with a darker, more sinister prophecy which threatens to unleash a battle out of legend unless Lin and her friends can stop it.


Praise For The Poet King (The Harp and Ring Sequence #3)…

“A book of old, wild magic—nothing is what it seems.” —Seth Dickinson, author of The Monster Baru Cormorant

“A fitting end to a gorgeous experiment in art, worldbuilding, and character, growing in strength from book to book.” —Kirkus, starred review

“Opulent, ambitious fantasy....Readers will be blown away by the lush, lyrical prose and epic scale of this novel.” —Publishers Weekly

“This riveting series conclusion is hard to set down and will leave readers hoping that Myer returns to this fantastic fantasy setting someday.” —Booklist

“A wondrous world matched in beauty only by the prose in which it is sung. Ilana Myer is incredible.” —Ken Liu, author of The Grace of Kings

“A brilliantly imagined page-turner...uses lush, lyrical prose to propel the reader through the machinations of a wildly original fantasy world. Highly recommended.” —Scott Hawkins, author of The Library at Mount Char

“With its lush bouquet of elegance, intrigue, and passion, Fire Dance is Myer at her most intoxicating.” —Mishell Baker, author of Borderline

“With detailed worldbuilding and vivid characters...this lush and luminous story combines exquisite splendor and fathomless cruelty as it champions the power of art and the resilience of the human spirit.” —RT Book Reviews

“Court intrigue and shadowy power spread through a richly described world, with strong characters and intricate prose to construct this absorbing plot…Myer’s sequel to Last Song Before Night is as powerful as its predecessor.” —Library Journal

“Beautiful imagery abounds.... Full of lyrical, thoughtful writing packed with so much resonant emotion that it begs to be experienced.” —Tor.com

“A triumph. A masterwork of character and prose that wind through your soul like the final trembling notes of a song.” —Pages Below The Vaulted Sky