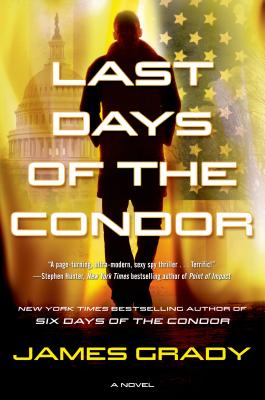 Last Days of the Condor

Look in the mirror: You're nobody anybody knows. You know pursuing the truth will get you killed. But you refuse to just fade away.

So you're designated an enemy of the largest secret national security apparatus in America's history. Good guys or bad guys, it doesn't matter: All assassins' guns are aimed at you. And you run for your life branded with the code name you made iconic: Condor.

Everyone you care about is pulled into the gunsights. The CIA star young enough to be your daughter-she might shoot you or save you. The savvy political aide who lets love trump the law. The lonely woman your romantic dreams make a fugitive. The Middle Eastern child warrior you mentored into a master spy.

Last Days of the Condor is the bullet-paced, ticking clock saga of America on the edge of our most startling spy world revolution since 9/11. Set in the savage streets and Kafkaesque corridors of Washington, DC, shot through with sex and suspense, with secret agent tradecraft and full-speed action, with hunters and the hunted, Last Days of the Condor is a breakneck saga of America's secrets from muckraking investigative reporter and author James Grady.


Praise For Last Days of the Condor: A Novel…

“Last Days of the Condor shoots high-caliber, nonstop suspense and action from the first to the last sentence, a page-turning, ultramodern, sexy spy thriller with compelling, multigenerational characters fighting to save themselves and our shadowed American dream. Terrific!” —Stephen Hunter, Pulitzer Prize–winning author of Point of Impact

“James Grady [is] the king of the modern espionage thriller.” —George Pelecanos, award-winning writer/producer of The Wire

“Lean, edgy and sassy... Grady is a master of the CIA genre.” —Kai Bird, Pulitzer Prize winning biographer and historian, author of The Good Spy: The Life and Death of Robert Ames

“Wonderful . . . Reading the novel, I sometimes thought of Orwell's novel, "1984," sometimes of the Dylan song "Desolation Row" . . . A novel that's supremely entertaining and a sad, important look at the United States today.” —The Washington Post

James Grady is the author of bestselling thrillers including Six Days of the Condor and Mad Dogs, the former of which became the Robert Redford movie Three Days of the Condor. He is the recipient of the Grand Prix du Roman Noir (France) and the Raymond Chandler Award (Italy), and was an Edgar nominee in the United States. Grady now lives in Washington, D.C.
Loading...
or
Not Currently Available for Direct Purchase