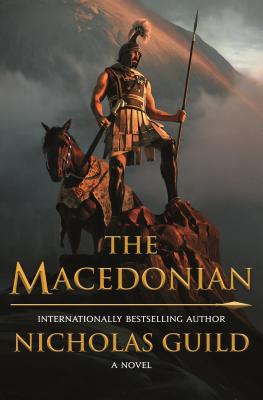 Nicholas Guild's The Macedonian is a gripping fictional account of the life of Philip of Macedon, the king who sired Alexander the Great and conquered an unprecedented number of ancient Greek city-states.

On a cold, snow-swept night in the ancient Greek kingdom of Macedon, a son is born to the king’s principal wife. His mother hates him for being his father’s child. His father hardly notices him. With two elder brothers, obscurity seems his destiny. The boy is sent off to be nursed by the chief steward’s wife.

Yet, in a moment of national crisis, when Macedon is on the verge of being torn apart, the prince raised by a servant finds himself proclaimed the king.

This is the story of Philip, prince and king, the forgotten boy who rose to save his country and became a legend in his own lifetime. His extensive military conquests across the Greek peninsula would pave the way for expansion under his son, Alexander the Great.


Praise For The Macedonian…

Praise for The Spartan Dagger

"A terrific work of historical imagination, The Spartan Dagger is not only a gripping tale of revenge but a remarkable recreation of a world long lost and largely misunderstood.” —Ralph Peters, New York Times bestselling author of The Damned of Petersburg

"Guild brings the ancient world of the Spartans thrillingly and brutally alive.” —Mary Pat Kelly, author of Of Irish Blood

NICHOLAS GUILD was born in Belmont, California, and attended Occidental College and the University of California at Berkeley. He taught at Clemson and Ohio State before turning full time to writing fiction. He has published a dozen novels in both the thriller and historical genres, several of which were international bestsellers, including The Assyrian, Blood Star, and Angel. Guild now lives in Frederick, Maryland.
Loading...
or support indie stores by buying on
(This book is on backorder)