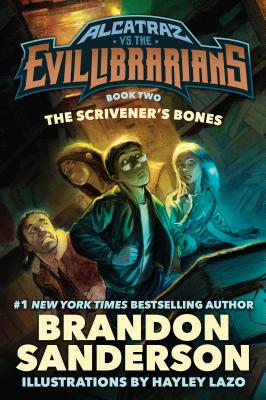 The Scrivener’s Bones is the second action-packed fantasy adventure in the Alcatraz vs. the Evil Librarians series for young readers by the #1 New York Times bestselling author Brandon Sanderson. These fast-paced and funny novels are now available in deluxe hardcover editions illustrated by Hayley Lazo.

In his second skirmish against the Evil Librarians who rule the world, Alcatraz and his ragtag crew of freedom fighters track Grandpa Smedry to the ancient and mysterious Library of Alexandria. Hushlanders—people who live in the Librarian-controlled lands of Canada, Europe, and the Americas—believe the Library was destroyed long ago. Free Kingdomers know the truth: the Library of Alexandria is still around, and it’s one of the most dangerous places on the planet. For it is the home of the scariest Librarians of them all: a secret sect of soul-stealing Scriveners. Can Alcatraz and his friends rescue Grandpa Smedry and make it out of there alive?

"In this original, hysterical homage to fantasy literature, Sanderson's first novel for youth recalls the best in Artemis Fowl and A Series of Unfortunate Events." —VOYA

"Alcatraz Smedry is back, and the action is just as nonstop, the librarians are just as evil, and the quips and asides (and outright lies) that the author insists on inflicting upon readers are just as omnipresent…. They will appreciate Sanderson's cheerful sarcastic wit and none-too-subtle digs at librarians." - School Library Journal