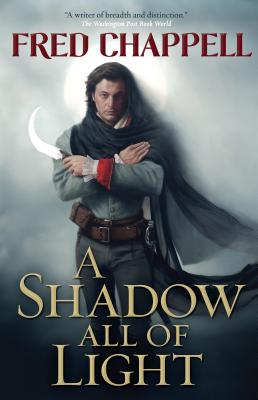 A Shadow All of Light

Fred Chappell's A Shadow All of Light, a stylish, episodic fantasy novel, follows the exploits of Falco, a young man from the country, who arrives in the port city of Tardocco with the ambition of becoming an apprentice to a master shadow thief. Maestro Astolfo, whose mysterious powers of observation would rival those of Sherlock Holmes, sees Falco's potential and puts him through a grueling series of physical lessons and intellectual tests.

Falco's adventures coalesce into one overarching story of con men, monsters, ingenious detection, cats, and pirates. A wry humor leavens this fantastical concoction, and the style is as rich and textured as one would hope for from Chappell, a distinguished poet as well as a World Fantasy Award-winning fantasy writer.


Praise For A Shadow All of Light: A Novel…

“More than the sum of its parts.” —Locus

“The humor, inventiveness and suspense are top-notch, and the concept is as sly as Lewis Carroll’s Cheshire.” —Asheville Citizen-Times

“Chappell has a deft touch for comedy and for capers, and his witty, elegant prose shows a poet’s deep love for words.” —Publishers Weekly

Fred Chappell is the award-winning author of more than twenty books of poetry and fiction, including I Am One of You Forever, Brighten the Corner Where You Are, and Look Back All the Green Valley. He has received many major prizes, including the Bollingen Prize in Poetry from Yale University and the Award in Literature from the National Institute of Arts and Letters. He lives with his wife, Susan in Greensboro, North Carolina.
Loading...
or
Not Currently Available for Direct Purchase