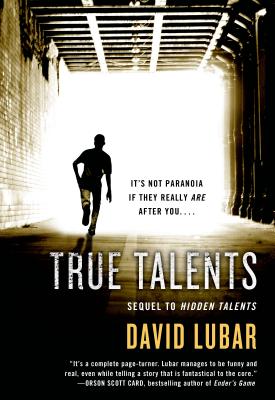 True Talents is the second suspenseful and hilarious novel for teens by acclaimed author, David Lubar about Martin Anderson and his exceptional friends. The supernatural duology begins with the wildly popular Hidden Talents.

It's been over a year since fourteen-year-old Eddie "Trash" Thalmeyer and his friends from Edgeview Alternative School found out about their hidden talents. Trash can move things with his mind, Torchie is a firestarter, Cheater reads minds, Lucky finds lost objects, Flinch can predict the future, and Martin can see into people's souls. Now back home with their families, all the boys want to do is get back to their normal lives, start attending high school, and keep in touch with their friends from Edgeview.

When Trash tests his power in a bank and accidentally steals a fistful of cash, he is kidnapped by the ruthless leader of a shadowy company whose purpose is to gather information about psychic phenomena—and who is willing to do anything to get it. Torchie, Cheater, Lucky, Flinch, and Martin join forces to rescue their friend using their hidden talents, and discover their true talents in the process.
True Talents is an American Library Association YALSA Quick Picks for Reluctant Young Readers selection.

“The author's writing is as fluid and teen-smart as ever.... [Lubar] deftly juggles the ensemble of five funny, thoughtful, distinct boys.” —School Library Journal

“Lubar's trademark blend of humor and suspense, complete with explosions, supernatural powers, and just enough gore, will be a hit. The book may be an entertaining sequel, but it also stands nicely on its own.” —Booklist

“[A] gripping page-turner, with a flawlessly structured plot and compelling, struggling characters who never let each other down.” —VOYA

“…an intriguing and socially conscious novel that addresses questions about exploitation, friendship, and taking a stand for what is right, no matter what the cost.” —Children's Literature

“You don't have to read Hidden Talents to enjoy True Talents--no matter which one you start with, you won't rest until you've read the other.” —Orson Scott Card

David Lubar created a sensation with his debut novel, Hidden Talents, an ALA Best Book for Young Adults. Thousands of kids and educators across the country have voted Hidden Talents onto over twenty state lists. David is also the author of True Talents, the sequel to Hidden Talents; Flip, an ALA Best Book for Young Adults and a VOYA Best Science Fiction, Fantasy and Horror selection; many short story collections including In the Land of the Lawn Weenies, Invasion of the Road Weenies, The Curse of the Campfire Weenies, The Battle of the Red Hot Pepper Weenies, Attack of the Vampire Weenies, Beware the Ninja Weenies, Wipeout of the Wireless Weenies, Strikeout of the Bleacher Weenies, and Extremities; and the Nathan Abercrombie, Accidental Zombie series. Lubar grew up in Morristown, New Jersey, and he has also lived in New Brunswick, Edison and Piscataway, NJ, and Sacramento, CA. Besides writing, he has also worked as a video game programmer and designer. He now lives in Nazareth, Pennsylvania.
Loading...
or support indie stores by buying on