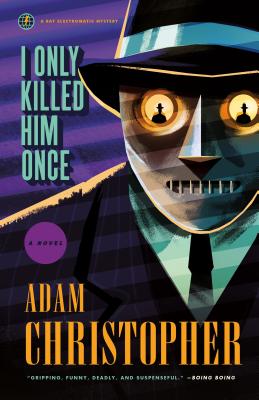 I Only Killed Him Once

A blend of science fiction and stylish mystery noir featuring a robot detective, I Only Killed Him Once, a stand-alone installment in Adam Christopher's Ray Electromatic mystery series.

Another Hollywood night, another job for electric-detective-turned-robotic-hitman Raymond Electromatic. The target is a tall man in a black hat, and while Ray completes his mission successfully, he makes a startling discovery—one he soon forgets when his 24-hour memory tape loops to the end and is replaced with a fresh reel…

When a tall man in a black hat arrives in the offices of the Electromatic Detective Agency the next day, Ray has a suspicion he has met this stranger before, although Ray’s computerized boss, Ada, is not saying a thing. But their visitor isn’t here to hire Ray for a job—he’s here to deliver a stark warning.

Because time is running out and if Ray and Ada want to survive, they need to do exactly what the man in the black hat says.

A man that Raymond Electromatic has already killed.

Praise for the Ray Electromatic Mysteries:

"The dialogue is effortlessly swift and clever, and even the B-movie climax is a spectacle to behold. Above that, though, Ray sparks to live, and his antiheroic slant only makes him that much more compelling and sympathetic."—NPR

"Humor, action, and heart: everything I've come to expect from an Adam Christopher book, and then some. A marvelous read!"—New York Times bestseller Jason M. Hough, author of Zero World

“Delivers like a punch from a two-ton robot in a zoot suit.”—Delilah Dawson

"Atmospheric and charming as hell. Adam Christopher has an extraordinary talent for scooping you up and dropping you into an alternative LA that feels just as real as the street outside your house."—Emma Newman

“Delivers like a punch from a two-ton robot in a zoot suit.”—Lila Bowen (aka Delilah Dawson)

"Hits hard, spins your head around, and leaves you stunned. So freakin’ perfect you’d think robot hitmen and retro supercomputers had always been part of noir fiction.”—Peter Clines, author of Paradox Bound and The Fold

"Will please fans of both gumshoes and laser beams."—Publishers Weekly

"A fun, fast read for anyone willing to take the speculative leap--a must-add for most fiction collections." —Booklist (starred review)

"Unlike anything I’ve ever read—a weird and wonderful voice and we are lucky to have it."—Chuck Wendig, New York Times bestselling author of Aftermath

Adam Christopher is a novelist and comic writer. In 2010, as an editor, Christopher won a Sir Julius Vogel award, New Zealand's highest science fiction honor. His debut novel, Empire State, was SciFiNow's Book of the Year and a Financial Times Book of the Year for 2012. In 2013, he was nominated for the Sir Julius Vogel award for Best New Talent, with Empire State shortlisted for Best Novel. His other novels include The Age Atomic and The Burning Dark.
Loading...
or
Not Currently Available for Direct Purchase