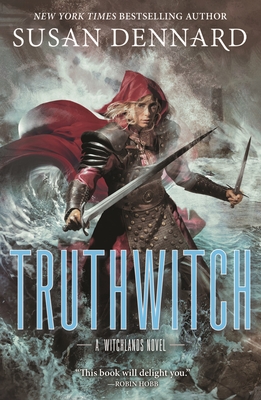 Two best friends use their magic to save the world from war and corruption in Susan Dennard's New York Times bestselling YA fantasy, Truthwitch.

On a continent ruled by three empires, some are born with a "witchery," a magical skill that sets them apart from others.

In the Witchlands, there are almost as many types of magic as there are ways to get in trouble—as two desperate young women know all too well.

Safiya is a Truthwitch, able to discern truth from lie. It’s a powerful magic that many would kill to have on their side, especially amongst the nobility to which Safi was born. So Safi must keep her gift hidden, lest she be used as a pawn in the struggle between empires.

Iseult, a Threadwitch, can see the invisible ties that bind and entangle the lives around her—but she cannot see the bonds that touch her own heart. Her unlikely friendship with Safi has taken her from life as an outcast into one of reckless adventure, where she is a cool, wary balance to Safiya’s hotheaded impulsiveness.

Safiya and Iseult just want to be free to live their own lives, but war is coming to the Witchlands. With the help of the cunning Prince Merik (a Windwitch and privateer) and the hindrance of a Bloodwitch bent on revenge, the friends must fight emperors, princes, and mercenaries alike who will stop at nothing to get their hands on a Truthwitch.


Praise For Truthwitch: The Witchlands…

“Truthwitch has all of the elements I savor-a richly imagined magical world, ruthless politics, steamy romance, and characters who grab you and won't let go. At its heart, a partnership between two strong young women who might change the world.” —Cinda Williams Chima, New York Times bestselling author of The Seven Realms series

“Featuring vibrant characters and an innovative system of magic, Susan Dennard's Truthwitch is a fast-paced adventure and a wonderful tribute to the power of the binding ties of friendship.” —Jacqueline Carey, New York Times bestselling author of the Kushiel’s Legacy series

“Sometimes, from not even halfway through a book, you know that you're going to make everyone you know read it. It's a book that, by the time you get to the end you crave the next book as if it were the most addicting chocolate on the planet. Truthwitch is that book for me. Gorgeously written, elegantly built, and perfect for ANY reader-Truthwitch is something you will not want to miss. Seriously.” —Rachel Strolle, Andersons Bookshop

“Full of magic, unbreakable friendships, and purpose, Truthwitch is absolutely everything I look for in a fantasy. Dennard's stunning prose weaves a lush and wonderful adventure tale that has already hooked this reader and will utterly enchant everyone else.” —Gaby Salpeter, Books of Wonder

Susan Dennard is the award-winning, New York Times bestselling author of the Witchlands series (now in development for TV from the Jim Henson Company), and the Something Strange and Deadly series, in addition to short fiction published online. She also runs the popular newsletter for writers, the Misfits and Daydreamers. When not writing or teaching writing, she can be found rolling the dice as a Dungeon Master or mashing buttons on one of her way too many consoles.
Loading...
or support indie stores by buying on