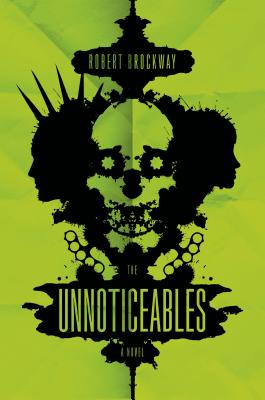 A Novel (The Vicious Circuit #1)

From Robert Brockway, Sr. Editor and Columnist of Cracked.com comes The Unnoticeables, a funny and frightening urban fantasy.
There are angels, and they are not beneficent or loving. But they do watch over us. They watch our lives unfold, analyzing us for repeating patterns and redundancies. When they find them, the angels simplify those patterns and remove the redundancies, and the problem that is "you" gets solved.
Carey doesn't much like that idea. As a punk living in New York City, 1977, Carey is sick and tired of watching strange kids with unnoticeable faces abduct his friends. He doesn't care about the rumors of tar-monsters in the sewers or unkillable psychopaths invading the punk scene—all he wants is to drink cheap beer and dispense ass-kickings.

Kaitlyn isn't sure what she's doing with her life. She came to Hollywood in 2013 to be a stunt woman, but last night a former teen heartthrob tried to eat her, her best friend has just gone missing, and there's an angel outside her apartment. Whatever she plans on doing with her life, it should probably happen in the few remaining minutes she has left.
There are angels. There are demons. They are the same thing. It's up to Carey and Kaitlyn to stop them. The survival of the human race is in their hands.


Praise For The Unnoticeables: A Novel (The Vicious Circuit #1)…

" The novel's author, Robert Brockway, is a senior editor at Cracked.com, and he brings that publication's legendarily irreverent wit to this raunchy, rollicking tale of punk rock, gruesome horror and pop-culture satire."—NPR

ROBERT BROCKWAY is a Senior Editor and columnist for Cracked.com. He lives in Portland, Oregon, with his wife Meagan and their two dogs, Detectives Martin Riggs and Roger Murtaugh. When not penning books like The Vicious Circle Novels (The Unnoticeables, The Empty Ones, and Kill All Angels), he has been known, on occasion, to have a beard.
Loading...
or
Not Currently Available for Direct Purchase