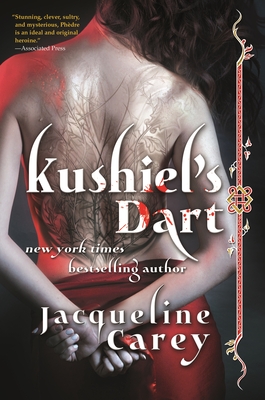 "When Love cast me out, it was Cruelty who took pity on me."

In a kingdom born of angels, Phedre is an anguisette, cursed or blessed to find pleasure in pain. Sold to the Court of Night Blooming Flowers, her fate as a beautiful but anonymous courtesan was sealed. Her bond was purchased by the nobleman Anafiel Delauney, who recognized the scarlet mote in Phedre's eye as the rare mark of one touched by a powerful deity. Under Delauney's patronage she is trained in history, politics, language, and the use of body and mind as the ultimate weapon of subterfuge in a dangerous game of courtly intrigue.

Guided into the bed chambers of Terre D'Ange's most influential nobles, Phedre uncovers a conspiracy against the throne so vast that even her teacher cannot see the whole of it. As her nation is besieged by invading hordes from the north, the most unthinkable threat to her beloved home comes from traitors within. Betrayed and blindsided by her own longings, only Phedre and her trusted bodyguard Josselin are left to cross borders and warring armies in a race to stop the final blow from falling.

Enter a lush world of pleasure houses, ambitious warlords, scheming courtiers, and the harsh justice of blessed deities through the eyes of a heroine like no other. Sprawling and darkly sensual, Jacqueline Carey's Kushiel's Dart is the start of a truly original fantasy series.

“This brilliant and daring debut catapults Carey immediately into the top rank of fantasy novelists . . . . At the end, the heroine reminds one of an equally strong-minded sister whose home was Tara.” —Publishers Weekly (starred review)