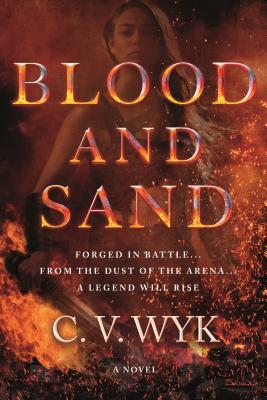 FORGED IN BATTLE...
FROM THE DUST OF THE ARENA...
A LEGEND WILL RISE

The action-packed tale of a 17-year-old warrior princess and a handsome gladiator who dared take on the Roman Republic—and gave rise to the legend of Spartacus...

For teens who love strong female protagonists in their fantasy and historical fiction, Blood and Sand is a stirring, yet poignant tale of two slaves who dared take on an empire by talented debut author C. V. Wyk.

Roma Victrix. The Republic of Rome is on a relentless march to create an empire—an empire built on the backs of the conquered, brought back to Rome as slaves.

Attia was once destined to rule as the queen and swordmaiden of Thrace, the greatest warrior kingdom the world had seen since Sparta. Now she is a slave, given to Xanthus, the Champion of Rome, as a sign of his master’s favor. Enslaved as a child, Xanthus is the preeminent gladiator of his generation.

Against all odds, Attia and Xanthus form a tentative bond. A bond that will spark a rebellion. A rebellion that threatens to bring the Roman Republic to its end—and gives rise to the legend of Spartacus...


Praise For Blood and Sand: A Novel…

“An action-packed debut novel. Attia makes an irresistible Spartacus... Revelations in the finale pave the way for what promises to be an epic battle in the next book.” —Publishers Weekly, starred review

“Only slightly similar in theme to Marie Rutkoski’s The Winner’s Curse, this debut is a unique addition to Ancient Roman historical fiction. This stunning series starter reads like a movie, with lengthy action scenes and strong imagery that allow readers to enjoy the narrative on a different level.” —School Library Journal, starred review

“The fights and battles are clear, exciting, and plentiful without being terribly graphic, and the love story, while a little quick, is deeply felt. Attia is a strong and skilled protagonist who, as the fiery ending indicates, has the tools and motivation to lead a rebellion.” —Booklist

“This is a textbook epic novel—sweeping fact, such as the volcanic destruction of Pompeii, and fiction into a tale of two heroes motivated by love for each other and conquered-nation pride. And it’s a textbook that’s fun reading on an after-chores Saturday or a curl-up-in-bed Sunday.”—Kirkus Reviews

“This book was amazing. It was interesting with a lot of plot twists and I couldn’t put it down…I like stories with strong female protagonists and romance, and this book had both. I especially liked how this novel had plot twists, humor, and conspiracies…Overall, I found this to be an amazing story, and it is, honestly, probably one of my favourite books. I would recommend it to anyone who loves YA novels with strong female protagonists.”—Airene, Teen Reader, Teen Book Review Project

C. V. Wyk graduated from Vanderbilt University with a BA in English Literature and European History. Blood and Sand is her first novel. Born in Los Angeles, California, she now lives in Maryland. Look for her online on Twitter and Tumblr.
Loading...
or
Not Currently Available for Direct Purchase