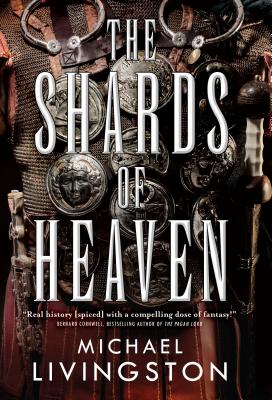 The Shards of Heaven

Michael Livingston's The Shards of Heaven reveals the hidden magic behind the history we know, and commences a war greater than any mere mortal battle

The beginning of an epic historical fantasy that rocks the foundations of the ancient world.

Julius Caesar is dead, assassinated on the senate floor, and the glory that is Rome has been torn in two. Octavian, Caesar's ambitious great-nephew and adopted son, vies with Marc Antony and Cleopatra for control of Caesar's legacy. As civil war rages from Rome to Alexandria, and vast armies and navies battle for supremacy, a secret conflict may shape the course of history.

Juba, Numidian prince and adopted brother of Octavian, has embarked on a ruthless quest for the Shards of Heaven, lost treasures said to possess the very power of the gods—or the one God. Driven by vengeance, Juba has already attained the fabled Trident of Poseidon, which may also be the staff once wielded by Moses. Now he will stop at nothing to obtain the other Shards, even if it means burning the entire world to the ground.

Caught up in these cataclysmic events, and the hunt for the Shards, are a pair of exiled Roman legionnaires, a Greek librarian of uncertain loyalties, assassins, spies, slaves . . . and the ten-year-old daughter of Cleopatra herself.

Michael Livingston, PhD. is the foremost academic interpreter of Robert Jordan's literary accomplishment and legacy. Among his many other books are the Shards of Heaven trilogy of novels (published by Tor) and multiple award-winning studies of military history. At present, he serves as the Secretary-General for the United States Commission on Military History and teaches at The Citadel.
Loading...
or
Not Currently Available for Direct Purchase