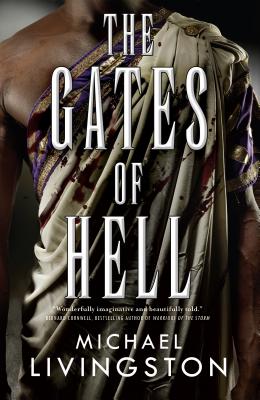 The Gates of Hell (The Shards of Heaven #2)

The Gates of Hell is the follow up to Michael Livingston’s amazing The Shards of Heaven, a historical fantasy that reveals the hidden magic behind the history we know, and commences a war greater than any mere mortal battle.

Alexandria has fallen, and with it the great kingdom of Egypt. Cleopatra is dead. Her children are paraded through the streets in chains wrought of their mother's golden treasures, and within a year all but one of them will be dead. Only her young daughter, Cleopatra Selene, survives to continue her quest for vengeance against Rome and its emperor, Augustus Caesar.

To show his strength, Augustus Caesar will go to war against the Cantabrians in northern Spain, and it isn't long before he calls on Juba of Numidia, his adopted half-brother and the man whom Selene has been made to marry—but whom she has grown to love. The young couple journey to the Cantabrian frontier, where they learn that Caesar wants Juba so he can use the Trident of Poseidon to destroy his enemies. Perfidy and treachery abound. Juba's love of Selene will cost him dearly in the epic fight, and the choices made may change the very fabric of the known world.

“Livingston has spiced real history with a compelling dose of fantasy! Wonderfully imaginative and beautifully told.” —Bernard Cornwell, bestselling author of The Pagan Lord, on The Shards of Heaven


Praise For The Gates of Hell (The Shards of Heaven #2)…

Praise for Michael Livingston’s The Shards of Heaven

“This multipronged tale is dense with action and incident; it’s grounded in history, mythology, and religion, but not weighed down by them.”—Publishers Weekly

“Titans of Roman history grapple for control of an empire with the aid of a mystical weapon in this debut historical fantasy novel…Readers will be captivated by the weaving of fiction with the reality of the past and the magic of the unseen world.”—Kirkus Reviews

“An accomplished nonfiction author and historian, Livingston (At the End of Babel) has a talent for storytelling that will keep readers immersed in the complex tale. His addition of a fantastical twist will not only fascinate readers, but have them clamoring for a sequel.”—Library Journal

MICHAEL LIVINGSTON holds degrees in History, Medieval Studies, and English. He is an Associate Professor of English at The Citadel, specializing in the middle Ages. His short fiction has been published in Black Gate, Shimmer, Paradox, and Nature. The Shards of Heaven is his first novel.
Loading...
or
Not Currently Available for Direct Purchase