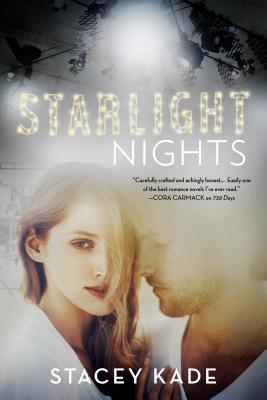 In this sizzling companion to the critically acclaimed 738 Days, Stacey Kade once again creates a masterful combination of romance, angst, and thrills in the backdrop of a Hollywood film set.

At twenty-two, Calista Beckett is trying to overcome her early fame and fortune. The former savior of the world on Starlight is now a freshman at college—miles away from L.A. and her former existence. She sees it as her start to a new life, a normal life, one where she won’t make the same mistakes she made before—a brush with heroin addiction and losing her freedom to her controlling mother, thanks to a court order.

Eric Stone played her older brother, Byron, on Starlight. But she’s been in love with him pretty much since they kissed—her first kiss—while auditioning. When Eric shows up on campus out of the blue, Calista’s struck immediately by two things: first, in spite of everything that’s happened, she still feels something dangerous for him, and second, she’s absolutely determined not to let him ruin her life again.

Only Eric’s not going away so easily.

The daughter of a minister and a music teacher, Stacey Kade grew up reading Harlequin romances on the sly in the basement. Her obsession with IMDb and the entertainment industry in general means no one will play her in Scene It or Hollywood Game Night anymore. Her one brush with fame was possibly seeing Billy Crystal in an airport once.

In the random fact category, Stacey is related to Margaret Scott, one of the women executed during the Salem Witch Trials.

Stacey is also the author of two young adult series (The Ghost and the Goth and the Project Paper Doll trilogies.) Prior to writing full time, Stacey worked as an award-winning copywriter for several Fortune 500 companies. She lives in the Chicago suburbs with her husband, Greg, and their two retired racing greyhounds.