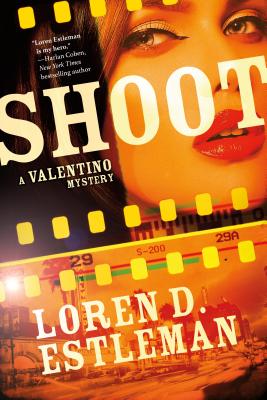 Valentino, a mild-manner film archivist at UCLA and sometime film detective, is at the closing party for the Red Montana and Dixie Day museum when he is approached by no less than his hero and man-of-the-hour Red Montana, western film and television star.

Red tells Valentino that he is being blackmailed over the existence of a blue film that his wife, now known throughout the world as the wholesome Dixie Day and the other half of the Montana/Day power couple, made early in her career. With Dixie on her deathbed, Red is desperate to save her the embarrassment of the promised scandal, and offers Valentino a deal-find the movie, and he can have Red's lost film, Sixgun Sonata, that Red has been hiding away in his archives. Don't accept, and the priceless reel will go up in flames.

Feeling blackmailed himself, Valentino agrees and begins to dig. In the surreal world of Hollywood, what is on screen is rarely reality. As he races to uncover the truth before time runs out, his heroes begin their fall from grace. Valentino desperately wants to save Sixgun Sonata...but at what cost?

Loren D. Estleman is the author of more than fifty novels, including the Amos Walker, Page Murdock, and Peter Macklin series. Winner of three Shamus Awards, three Western Heritage Awards, four Spur Awards and many other literary prizes. He lives outside Detroit with his wife, author Deborah Morgan.
or
Not Currently Available for Direct Purchase
Copyright © 2020 American Booksellers Association