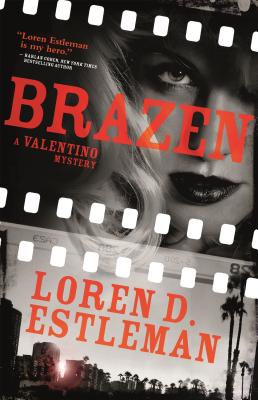 A killer is reenacting the deaths of Hollywood's blond bombshells, and Valentino must stop him before it's too late in Loren D. Estleman's Brazen.

UCLA film archivist and sometime film detective Valentino doesn’t take friend and former actress Beata Limerick very seriously when she tells him that she quit acting because of the curse on blond actresses. Marilyn Monroe, Jayne Mansfield, Thelma Todd, Sharon Tate… they all had more fun, but none of them made it out of the business alive, and according to Limerick, she wasn’t taking any chances. But when Valentino finds Beata’s body staged the way Monroe was found, “Diamonds Are a Girl’s Best Friend” playing on repeat; he knows Limerick's death was no accident.

Police detective Ray Padilla doesn’t quite suspect Valentino is the killer, but he can’t let him off that easy. After all, the film archivist seems to be involved in more than his share of intrigue and death, which makes him a prime suspect. But Valentino is also a walking encyclopedia of Hollywood knowledge. When another washed-up actress is killed, the crime scene a copy of Thelma Todd’s last moments, Padilla enlists Valentino’s help in catching a serial killer of doomed blondes before he can strike again.

Loren D. Estleman is the author of more than eighty novels, including the Amos Walker, Page Murdock, and Peter Macklin series. The winner of four Shamus Awards, five Spur Awards, and three Western Heritage Awards, he lives in Central Michigan with his wife, author Deborah Morgan.
Loading...
or support indie stores by buying on