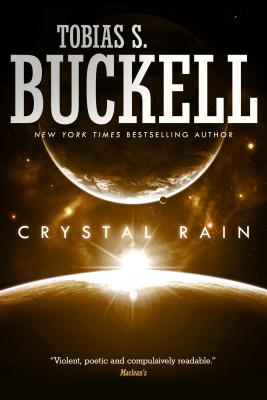 Legends say that the forefathers of Nanagada fled a far-off star to their new home. They say that the sky once hummed with metal flying machines and palatial floating cities. But then the Azteca came. Created and driven by cruel, inhuman gods, they swarmed out of the sky in search of sacrificial blood, and worse. To defeat them and their gods, the forefathers burned the sky. The cities and machines fell to the ground, useless.

In the centuries since, Azteca have kept to their side of the mountains in an uneasy truce. But now it has been broken. Only one man can stop their bloodthirsty march: John deBrun. His family scattered, John holds the key to an ancient secret deep in memories lost just before he was dragged unconscious from the sea years ago….

If he can stay alive long enough to uncover them, he might be able to stop the destruction of Nanagada.

Crystal Rain is the first novel by one of science fiction's newest and most promising talents. Now featuring brand new cover art.

“Buckell's debut captures the flavor of Afro-Caribbean culture in the lilting dialog of his characters and in their customs. An original tale with distinctive characters and a fresh approach to worldbuilding, this SF quest belongs in most libraries.” —Library Journal, starred review

“Crystal Rain conjures a vividly imagined world, spiced with intrigue and adventure that unfolds at a breakneck pace.” —Booklist

“Even non-sci-fi readers will be bowled over.... Violent, poetic, and compulsively readable.” —Maclean's (Canada)