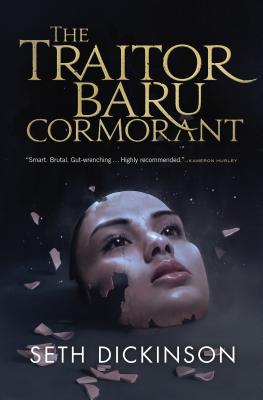 The Traitor Baru Cormorant (The Masquerade #1)

In Seth Dickinson's highly-anticipated debut The Traitor Baru Cormorant, a young woman from a conquered people tries to transform an empire in this richly imagined geopolitical fantasy.

Baru Cormorant believes any price is worth paying to liberate her people-even her soul.

When the Empire of Masks conquers her island home, overwrites her culture, criminalizes her customs, and murders one of her fathers, Baru vows to swallow her hate, join the Empire's civil service, and claw her way high enough to set her people free.

Sent as an Imperial agent to distant Aurdwynn, another conquered country, Baru discovers it's on the brink of rebellion. Drawn by the intriguing duchess Tain Hu into a circle of seditious dukes, Baru may be able to use her position to help. As she pursues a precarious balance between the rebels and a shadowy cabal within the Empire, she orchestrates a do-or-die gambit with freedom as the prize.

But the cost of winning the long game of saving her people may be far greater than Baru imagines.


Praise For The Traitor Baru Cormorant (The Masquerade #1)…

“This is an accomplished debut, with a heroine whose motives are murky, seemingly even to herself. The twists and turns our unreliable narrator takes as she pushes the Aurdwynn nobles to rebel reveal her goals yet also expose her loneliness. We’ve only seen a fraction of the world of the Masquerade and a glimpse of Baru’s plans, setting the stage for a compelling series.—Library Journal, starred review

“Dickinson’s debut, the start of a trilogy set in an impressively well-crafted fantasy world, is assured and impressive….Readers will share every one of Baru’s strong, suppressed emotions. Dickinson’s worldbuilding is ambitious and his language deviously subtle; both are seductive in their complexity.” –Publishers Weekly (starred review)

“Smart. Brutal. Gut-wrenching. You'll be captivated from the very first page. Dickinson is a sly, masterful writer who pulls no punches. Get ready to have your heart ripped out through your throat. Highly recommended.” —Kameron Hurley, author of The Mirror Empire

“Fascinating characters, a world imagined with wonderful depth, and storytelling that succeeds on both an epic and a powerfully intimate scale. This is really something special.” —Sunny Moraine, co-author of Line and Orbit

“A beautiful, perfectly formed crystal of a novel borne out of a tight plot mated with elegant language.” —John Chu, Hugo Award-winning author of ‘The Water That Falls on You from Nowhere"

“Skillfully combines intrigue, action, and philosophical musings to create a suspenseful and deeply satisfying read. An intelligent and accomplished first novel reminiscent of Le Guin in its reflections on imperialism, colonialism, and the attractions and corruptions of power.” —Una McCormack, New York Times bestselling author of The Crimson Shadow

“Brutal, relentless and with the heartbreaking beauty of the best tragedies. The Traitor Baru Cormorant is a haunting book that asks hard questions about revolution, change, and what it means to keep faith.” —Aliette de Bodard, Nebula Award-winning author of “The Waiting Stars”

“Dickinson has written a poet's Dune, a brutal tale of empire, rebellion, fealty, and high finance that moves like a rocket and burns twice as hot. The Traitor Baru Cormorant is a mic drop for epic fantasy.” —Max Gladstone, author of the Craft Sequence

“An extraordinary debut--powerful, complex, and passionate. I was blown away by it.” —Kij Johnson, Hugo Award-winning author of "The Man Who Bridged the Mist"

“Stunning! There are moments that take my breath away.” —Ellen Kushner, World Fantasy Award-winning author of Thomas the Rhymer

“Visceral and unflinching, The Traitor Baru Cormorant employs a rich palate of cultures to explore brutal moral complexities. Lightning strikes when those elements collide, setting off the bitter internal conflict of a narrator with vast, irreconcilable ambitions. With this debut, Seth Dickinson declares himself as a novelist with power and acuity.” —Rachel Swirsky, Nebula Award-winning author of “The Lady Who Plucked Red Flowers Beneath the Queen’s Window”

“Beautiful and brutal. This is unflinching fantasy.” —Chuck Wendig, author of Blackbirds

SETH DICKINSON's short fiction has appeared in Analog, Asimov's, Clarkesworld, Lightspeed, Strange Horizons,Beneath Ceaseless Skies, among others. He is an instructor at the Alpha Workshop for Young Writers, winner of the 2011 Dell Magazines Award, and a lapsed student of social neuroscience. He lives in Brooklyn, New York. The Traitor Baru Cormorant is his first novel.
Loading...
or
Not Currently Available for Direct Purchase