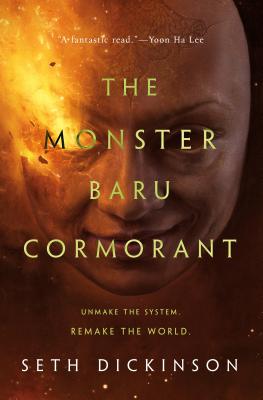 The Monster Baru Cormorant (The Masquerade #2)

Her world was shattered by the Empire of Masks.
For the power to shatter the Masquerade,
She betrayed everyone she loved.

The traitor Baru Cormorant is now the cryptarch Agonist—a secret lord of the empire she's vowed to destroy.

Hunted by a mutinous admiral, haunted by the wound which has split her mind in two, Baru leads her dearest foes on an expedition for the secret of immortality. It's her chance to trigger a war that will consume the Masquerade.

But Baru's heart is broken, and she fears she can no longer tell justice from revenge...or her own desires from the will of the man who remade her.


Praise For The Monster Baru Cormorant (The Masquerade #2)…

Praise for The Traitor Baru Cormorant

“Dickinson’s debut, the start of a trilogy set in an impressively well-crafted fantasy world, is assured and impressive….Readers will share every one of Baru’s strong, suppressed emotions. Dickinson’s worldbuilding is ambitious and his language deviously subtle; both are seductive in their complexity.” –Publishers Weekly, starred review

“Complex and sneakily smart…will have you biting your nails the whole way through.” —Buzzfeed

SETH DICKINSON's short fiction has appeared in Analog, Asimov's, Clarkesworld, Lightspeed, Strange Horizons,Beneath Ceaseless Skies, among others. He is an instructor at the Alpha Workshop for Young Writers, winner of the 2011 Dell Magazines Award, and a lapsed student of social neuroscience. He lives in Brooklyn, New York. The Traitor Baru Cormorant is his first novel.
Loading...
or
Not Currently Available for Direct Purchase