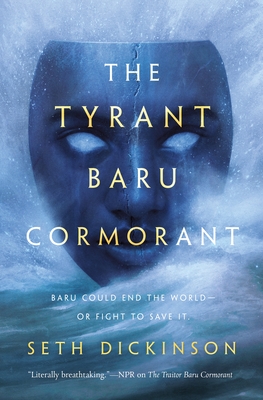 The Tyrant Baru Cormorant (The Masquerade #3)

The hunt is over. After fifteen years of lies and sacrifice, Baru Cormorant has the power to destroy the Imperial Republic of Falcrest that she pretends to serve. The secret society called the Cancrioth is real, and Baru is among them.

But the Cancrioth's weapon cannot distinguish the guilty from the innocent. If it escapes quarantine, the ancient hemorrhagic plague called the Kettling will kill hundreds of millions...not just in Falcrest, but all across the world. History will end in a black bloodstain.

Is that justice? Is this really what Tain Hu hoped for when she sacrificed herself?

Baru's enemies close in from all sides. Baru's own mind teeters on the edge of madness or shattering revelation. Now she must choose between genocidal revenge and a far more difficult path—a conspiracy of judges, kings, spies and immortals, puppeteering the world's riches and two great wars in a gambit for the ultimate prize.

If Baru had absolute power over the Imperial Republic, she could force Falcrest to abandon its colonies and make right its crimes.


Praise For The Tyrant Baru Cormorant (The Masquerade #3)…

Praise for The Monster Baru Cormorant:

"With its twisty intrigues, visceral action, and characters who struggle to escape their own calculations, The Monster Baru Cormorant is a fantastic read that never lets up." —Yoon Ha Lee, author of Ninefox Gambit

Praise for The Traitor Baru Cormorant:

"Brutal, relentless and with the heartbreaking beauty of the best tragedies." —Aliette de Bodard, Nebula Award-winning author of “The Waiting Stars”

"A beautiful, perfectly formed crystal of a novel." —John Chu, Hugo Award-winning author of "The Water That Falls on You from Nowhere"

"An intelligent and accomplished first novel reminiscent of Le Guin in its reflections on imperialism, colonialism, and the attractions and corruptions of power." —Una McCormack, New York Times bestselling author of The Crimson Shadow

"Smart. Brutal. Gut-wrenching...Get ready to have your heart ripped out through your throat. Highly recommended." —Kameron Hurley, Hugo-winning author of The Geek Feminist Revolution

"Dickinson has written a poet's Dune, a brutal tale of empire, rebellion, fealty, and high finance that moves like a rocket and burns twice as hot. The Traitor Baru Cormorant is a mic drop for epic fantasy." —Max Gladstone, author of the Hugo-nominated Craft Sequence

SETH DICKINSON is the author of the Baru Cormorant novels and many short stories, as well as much of the lore and backstory of Bungie Studios’ Destiny. Seth lives in New York City.
Loading...
or
Not Currently Available for Direct Purchase