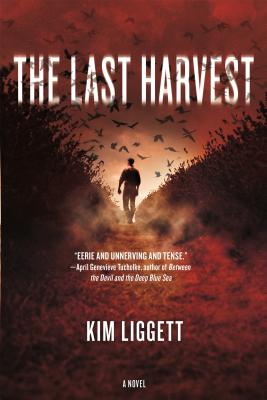 Kim Liggett draws on her childhood during the Satanic Panic for a chilling tale of magic in The Last Harvest, winner of the 2017 Bram Stoker Award.

"I plead the blood."

Those were the last words seventeen-year-old golden boy quarterback Clay Tate heard rattling from his dad's throat when he discovered him dying on the barn floor of the Neely cattle ranch, clutching a crucifix to his chest.

Now, on the first anniversary of the Midland, Oklahoma, slaughter, the whole town's looking at Clay like he might be next to go over the edge. Clay wants to forget the past, but the sons and daughters of the Preservation Society—a group of prominent farmers his dad accused of devil worship—won't leave him alone. Including Ali, his longtime crush, who suddenly wants to reignite their romance after a year of silence, and hated rival Tyler Neely, who's behaving like they're old friends.

Even as Clay tries to reassure himself, creepy glances turn to sinister stares and strange coincidences build to gruesome rituals, but when he can never prove that any of it happened, Clay worries he might be following his dad down the path to insanity...or that something far more terrifying lies in wait around the corner.


Praise For The Last Harvest: A Novel…

“An eerie new take on the classic Satan-worshipping horror story....With vivid and terrifying characters and events, this novel is chilling, emotional, and full of nightmarish surprises.” - TeenReads

Kim Liggett, originally from the rural Midwest, moved to New York City to pursue a career in the arts. She's the author of Blood and Salt, Heart of Ash, The Last Harvest (Bram Stoker Award Winner), The Unfortunates, and The Grace Year. Kim spends her free time studying tarot and scouring Manhattan for rare vials of perfume and the perfect egg-white cocktail.
Loading...
or
Not Currently Available for Direct Purchase