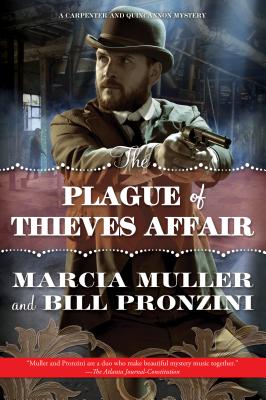 The Plague of Thieves Affair

Will the true identity of the Sherlock Holmes imposter be revealed at last? Find out in Marcia Muller and Bill Pronzini's The Plague of Thieves Affair

Sabina Carpenter and John Quinncannon are no stranger to mysteries. In the five years since they opened Carpenter and Quinncannon, Professional Detective Services, they have solved dozens, but one has eluded even them: Sherlock Holmes or, rather, the madman claiming his identity, who keeps showing up with a frustrating (though admittedly useful) knack for solving difficult cases.

Roland W. Fairchild, recently arrived from Chicago, claims Holmes is his first cousin, Charles P. Fairchild III. Now, with his father dead, Charles stands to inherit an estate of over three million dollars-if Sabina can find him, and if he can be proved sane. Sabina is uncertain of Roland's motives, but agrees to take the case.

John, meanwhile, has been hired by the owner of the Golden State brewery to investigate the "accidental" death of the head brewmaster, who drowned in a vat of his own beer. When a second murder occurs, and the murderer escapes from under his nose, John finds himself on the trail not just of the criminals, but of his reputation for catching them.

But while John is certain he can catch his quarry, Sabina is less certain she wants to catch hers. Holmes has been frustrating, but useful, even kind. She is quite certain he is mad, and quite uncertain what will happen when he is confronted with the truth. Does every mystery need to be solved?


Praise For The Plague of Thieves Affair: A Carpenter and Quincannon Mystery…

"The authors are masters at plot, clues, red herrings, and action sequences. They are such pros, the pace and plot lines are nicely modulated with just the right number of twists." - Mystery Scene

"Authors Muller and Pronzini handle the various complications in the plot with a deft hand. Their familiarity with Victorian San Francisco adds a touch of realism to this very enjoyable caper that lifts it above the verbal slapstick of certain mysteries in this genre." - NY Journal of Books

"Steeped in rich, atmospheric and authentic descriptions of the times." - Book Reporter