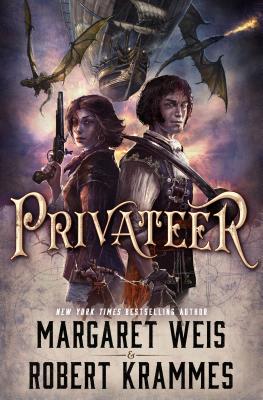 The swashbuckling adventures of Captain Kate Fitzmaurice continues in this thrilling continuation of the epic tale of the Dragon Corsairs.

Captain Kate escapes the hangman's noose with the help of Prince Thomas, only to discover to her dismay that her dragon friend, Dalgren, has gone back to his homeland to face trial for desertion. Spymaster Henry Wallace plots to stop Prince Thomas from gaining the Freyan throne as the prince makes a daring move to prove his claim.

A dangerous mission to the dark world of the Bottom Dwellers leads Kate to the discovery of a dark plot that threatens the lives of her friends and places the fate of a nation in her hands.

ROBERT KRAMMES is a game designer and the general manager at Aztec Video Productions. He is the author of the Dragon Brigade Series along with Margaret Weis. He lives in Cincinnati, Ohio.

Praise For Privateer (The Dragon Corsairs #2)…