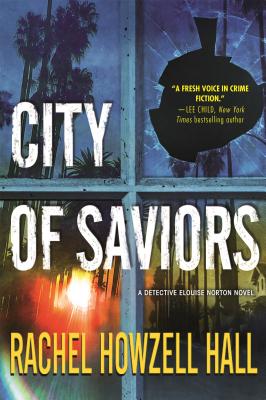 “Hall deserves to be compared to Kathy Reichs or Patricia Cornwell, and it will not be long before she is recognized as every bit as big a crime writing star.”--Daily Mail (UK)

After a long Labor Day weekend, seventy-three-year-old Eugene Washington is found dead in his Leimert Park home. At first blush, his death seems unremarkable—heatwave combined with food poisoning from a holiday barbecue. But something in the way Washington died doesn’t make sense. LAPD Homicide Detective Elouise "Lou" Norton is called to investigate the death and learns that the only family Washington had was the 6,000-member congregation of Blessed Mission Ministries, led by Bishop Solomon Tate.

But something wicked is lurking among the congregants of this church.

Lou’s partner, Detective Colin Taggert, thinks her focus on the congregation comes from her distrust of organized religion. But Lou is convinced that the murderer is sitting in one of those red velvet pews—and that Bishop Tate may be protecting the wolf in the flock. Lou must force the truth into the light and confront her own demons in order to save another soul before it’s too late.


Praise For City of Saviors: A Detective Elouise Norton Novel…

"Lou . . . is a formidable fighter—someone you want on your side."—New York Times Book Review

“A much needed breath of fresh air . . . Quite simply, in this series, Hall is hitting all the right notes."—The Root

RACHEL HOWZELL HALL is the author of the acclaimed Lou Norton series, the standalone thriller They All Fall Down, and co-author of The Good Sister with James Patterson, which appeared in the New York Times bestselling anthology The Family Lawyer. She is the senior development officer for the Donor Relations Department at Cedars Sinai. Currently she serves on the Board of Directors for the Mystery Writers of America, is a member of Sisters in Crime, and has participated as a mentor in the Association of Writers and Writing Programs’ Writer-to-Writer Program. She lives in Los Angeles.
Loading...
or
Not Currently Available for Direct Purchase