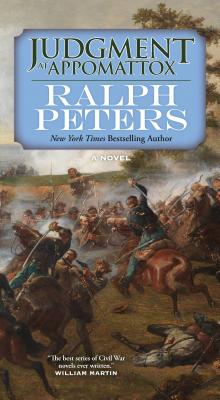 A Novel (The Battle Hymn Cycle #5)

Each day brings new combat and more casualties, as Lee’s exhausted, hungry troops race to preserve the Confederacy. But Grant does not intend to let Lee escape...

In one of the most thrilling episodes in American history, heroes North and South, John Brown Gordon and Phillip Sheridan, James Longstreet and Francis Channing Barlow, battle each other across southern Virginia as the armies converge on a sleepy country court house.

Written with the literary flair and historical accuracy readers expect from Ralph Peters, Judgment at Appomattox takes us through the Civil War’s last grim interludes of combat as flags fall and hearts break. Capping the author’s acclaimed five-novel cycle on the war in the East, this “dramatized history” pays homage to all the soldiers who fought, from an Irish-immigrant private wearing gray, to the “boy generals” who mastered modern war. This is a grand climax to a great, prize-winning series that honors—and reveals—America's past.

Ralph Peters is a retired Army lieutenant colonel and former enlisted man, a controversial strategist and veteran of the intelligence world; a bestselling, prize-winning novelist; a journalist who has covered multiple conflicts and appears frequently in the broadcast media; and a lifelong traveler with experience in over seventy countries on six continents. A widely read columnist, Ralph Peters' journalism has appeared in dozens of newspapers, magazines and web-zines, including The New York Post, The Wall Street Journal, USA Today, the Washington Post, Newsweek, Harpers, and Armchair General Magazine. His books include The Officers’ Club, The War After Armageddon, Endless War, and Red Army. Peters grew up in Schuylkill County, Pennsylvania, and studied writing at Pennsylvania State University. He lives and writes in the Washington, D.C. area.
or support indie stores by buying on
Copyright © 2020 American Booksellers Association