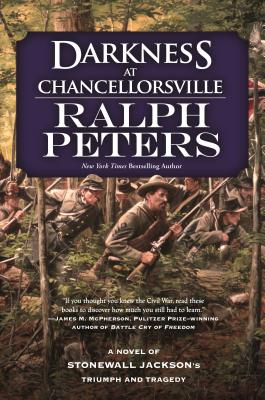 A Novel of Stonewall Jackson's Triumph and Tragedy

Ralph Peters' Darkness at Chancellorsville is a novel of one of the most dramatic battles in American history, from the New York Times bestselling, three-time Boyd Award-winning author of the Battle Hymn Cycle.

Centered upon one of the most surprising and dramatic battles in American history, Darkness at Chancellorsville recreates what began as a brilliant, triumphant campaign for the Union—only to end in disaster for the North. Famed Confederate Generals Robert E. Lee and Stonewall Jackson bring off an against-all-odds surprise victory, humiliating a Yankee force three times the size of their own, while the Northern army is torn by rivalries, anti-immigrant prejudice and selfish ambition.

This historically accurate epic captures the high drama, human complexity and existential threat that nearly tore the United States in two, featuring a broad range of fascinating—and real—characters, in blue and gray, who sum to an untold story about a battle that has attained mythic proportions. And, in the end, the Confederate triumph proved a Pyrrhic victory, since it lured Lee to embark on what would become the war's turning point—the Gettysburg Campaign (featured in Cain At Gettysburg).


Praise For Darkness at Chancellorsville: A Novel of Stonewall Jackson's Triumph and Tragedy…

“A must-read for Civil War novice and aficionado alike.”
—John Horn, author of The Siege of Petersburg

“As historically accurate as it is enthralling.”
—Victor Davis Hanson, author of Carnage and Culture

“A classic for the ages.”
—New York Journal of Books

Ralph Peters is a retired Army lieutenant colonel and former enlisted man, a controversial strategist and veteran of the intelligence world; a bestselling, prize-winning novelist; a journalist who has covered multiple conflicts and appears frequently in the broadcast media; and a lifelong traveler with experience in over seventy countries on six continents. A widely read columnist, Ralph Peters' journalism has appeared in dozens of newspapers, magazines and web-zines, including The New York Post, The Wall Street Journal, USA Today, the Washington Post, Newsweek, Harpers, and Armchair General Magazine. His books include The Officers’ Club, The War After Armageddon, Endless War, and Red Army. Peters grew up in Schuylkill County, Pennsylvania, and studied writing at Pennsylvania State University. He lives and writes in the Washington, D.C. area.
Loading...
or support indie stores by buying on
(This book is on backorder)