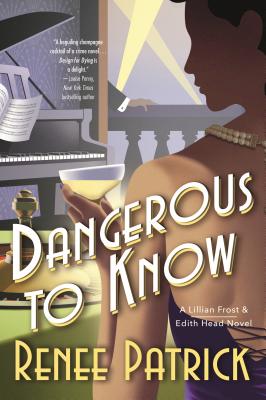 Los Angeles, 1938. Former aspiring actress Lillian Frost is adjusting to a new life of boldfaced names as social secretary to a movie-mad millionaire. Costume designer Edith Head is running Paramount Pictures’ wardrobe department, but only until a suitable replacement comes along. The two friends again become partners thanks to an international scandal, a real-life incident in which the war clouds gathering over Europe cast a shadow on Hollywood.

Edith also seeks Lillian’s help on a related matter. The émigré pianist in Marlene Dietrich’s budding nightclub act has vanished. Lillian reluctantly agrees to look for him. When Lillian finds him dead, Dietrich blames agents of the Reich. As Lillian and Edith unravel intrigue extending from Paramount’s Bronson Gate to FDR’s Oval Office, only one thing is certain: they’ll do it in style.

"Just like a movie, DANGEROUS TO KNOW rests on a lot of research and rigging, but all we see is the magic show: effortless, absorbing, entertaining from page one, surprising to the last. Patrick brings a time and place so skillfully to life that we're genuinely starstruck when Dorothy Lamour or Jack Benny pops up in a cameo. And Lillian Frost has earned her sidewalk star as one of the great, fast-talking, plucky, funny girls of the Hollywood Golden Age."--Catriona McPherson, multi-award winning author of the Dandy Gilver Mysteries and THE CHILD GARDEN

"Set in December 1938, Patrick’s sassy second series novel takes the reader on an exhilarating ride through Hollywood in its heyday. Real-life celebrities...populate this meticulously researched book, in which the most outlandish incidents are verifiably true. Lovers of old movies, fabulous gowns, and historical gossip will be enchanted."--Publishers Weekly

Praise for Design for Dying