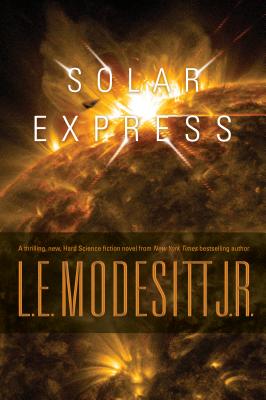 You can't militarize space. This one rule has led to decades of peaceful development of space programs worldwide. However, increasing resource scarcity and a changing climate on Earth's surface is causing some interested parties to militarize, namely India, the North American Union, and the Sinese Federation.

The discovery of a strange artifact by Dr. Alayna Wong precipitates a crisis. What appears to be a hitherto undiscovered comet is soon revealed to be an alien structure on a cometary trajectory toward the sun. Now there is a race between countries to see who can study and control the artifact dubbed the "Solar Express" before it perhaps destroys itself.

Leading the way for the North American Union is Alayna's friend, Captain Christopher Tavoian, one of the first shuttle pilots to be trained for combat in space. But, as the alien craft gets closer to its destination, it begins to alter the surface of the sun in strange new ways, ways that could lead Alayna to revolutionary discoveries-provided Chris can prevent war from breaking out as he navigates among the escalating tensions between nations.

Other Series by L.E. Modesitt, Jr.
The Saga of Recluce
The Imager Portfolio
The Corean Chronicles
The Spellsong Cycle
The Ghost Books
The Ecolitan Matter
The Forever Hero
Timegod's World

“A tale set a century from now that is unlike anything he has written before...This is a quiet tale of normal scientists working with a strange object... I found the tale fascinating.” —Philadelphia Free Press

“Anyone that enjoys a rousing tale of action and adventure will enjoy this tale. There is also a vibe of classic space adventure with a puzzle waiting to be solved and human nature and curiosity is as great a threat as the natural forces and rival nations.” —SF Revu

“Tor/Forge Books and NASA created NASA-Inspired Works of Fiction (NIWoF), a series of books centered on the concepts pertinent to the current and future work of NASA. ... They are encouraging space exploration and potential resource discoveries that exist a bit closer to home. Modesitt has a great ability for weaving real-life science into compelling adventures and understands the technology needed to turn dreams into reality. I cannot say enough about the author's writing and skill in drawing the reader into this book.” —The Nameless Zine