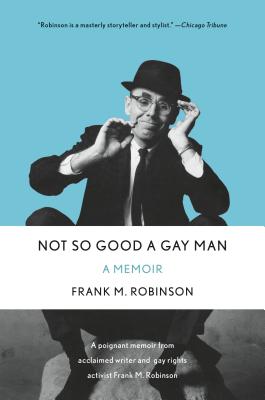 Not So Good a Gay Man

Not So Good a Gay Man is the compelling memoir of author, screenwriter, and activist Frank M. Robinson.

Frank M. Robinson (1926-2014) accomplished a great deal in his long life, working in magazine publishing, including a stint for Playboy, and writing science fiction such as The Power, The Dark Beyond the Stars, and thrillers such as The Glass Inferno (filmed as The Towering Inferno). Robinson also passionately engaged in politics, fighting for gay rights, and most famously writing speeches for his good friend Harvey Milk in San Francisco.

This deeply personal autobiography, addressed to a friend in the gay community, explains the life of one gay man over eight decades in America. By turns witty, charming, and poignant, this memoir grants insights into Robinson's work not just as a journalist and writer, but as a gay man navigating the often perilous social landscape of 20th century life in the United States. The bedrock sincerity and painful honesty with which he describes this life makes Not So Good a Gay Man compelling reading.


Praise For Not So Good a Gay Man: A Memoir…

Praise for Not So Good a Gay Man

"Vivid and detailed, Robinson's story is an engaging recollection of the golden age of pulp fiction interwoven with the story of a man's successful struggle to accept himself. Fascinating reading, especially for fans of 20th-century science fiction." —Kirkus

"[Robinson's] closely observed view of gay life and culture, especially in his home city of San Francisco, is insightful and often moving." —Booklist

Frank M. Robinson (1926-2014) is the author of the classic thrillers, The Power, filmed in 1968, and The Glass Tower, which was one of the sources for the Irwin Allen blockbuster film The Towering Inferno. A U.S. Navy veteran of both WWII and the Korean War, he earned degrees in physics and journalism. He worked at a number of magazines, including Science Digest, Rogue, Cavalier and Playboy before becoming a freelance writer. He is the author of many novels and stories, a noted collector of pulp magazines, and was the executor of the estate of Harvey Milk. His novel The Dark Beyond the Stars won the Lambda Award.
Loading...
or support indie stores by buying on