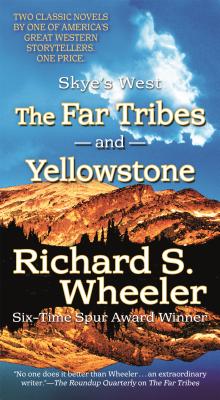 Two complete novels from a master of the Western novel Richard S. Wheeler, in one low-priced edition

Elkanah Morse came west from Lowell, Massachusetts with one goal in mind: to study the ways of the far tribes. Entrance into their world is not easy, though, and only one man is capable of bringing him to the natives safely, only one man who knows exactly what to bring for trade: Barnaby Skye. But Skye's advice is not enough. When rumors begin to spill that Morse is being held captive by one of the most vicious tribes in the mountains, Barnaby Skye feels compelled to take to the mountains and rescue the man…but he must face his most brutal battle yet.

In a wild, untamed country where the hot blood of the Earth bubbled up to sear the air, Barnaby Skye and his two beautiful Indian wives knew the dangers of the land and its rules of survival. But Lord Gordon just wanted to kill buffalo and entertain his high-bred ladies; the rules, he scoffed, couldn't possibly apply to one such as himself. The first smart thing the British peer did was to hire the best of the best—Barnaby Skye. The first stupid thing he did was to fire Barnarby Skye—the only man who could guide him through the treacherous lands of the Sioux Nation. Lord Gordon was determined to do it his way, but Mister Skye was every bit as determined himself. And their suborn clash of wills could prove as deadly as the land around them.